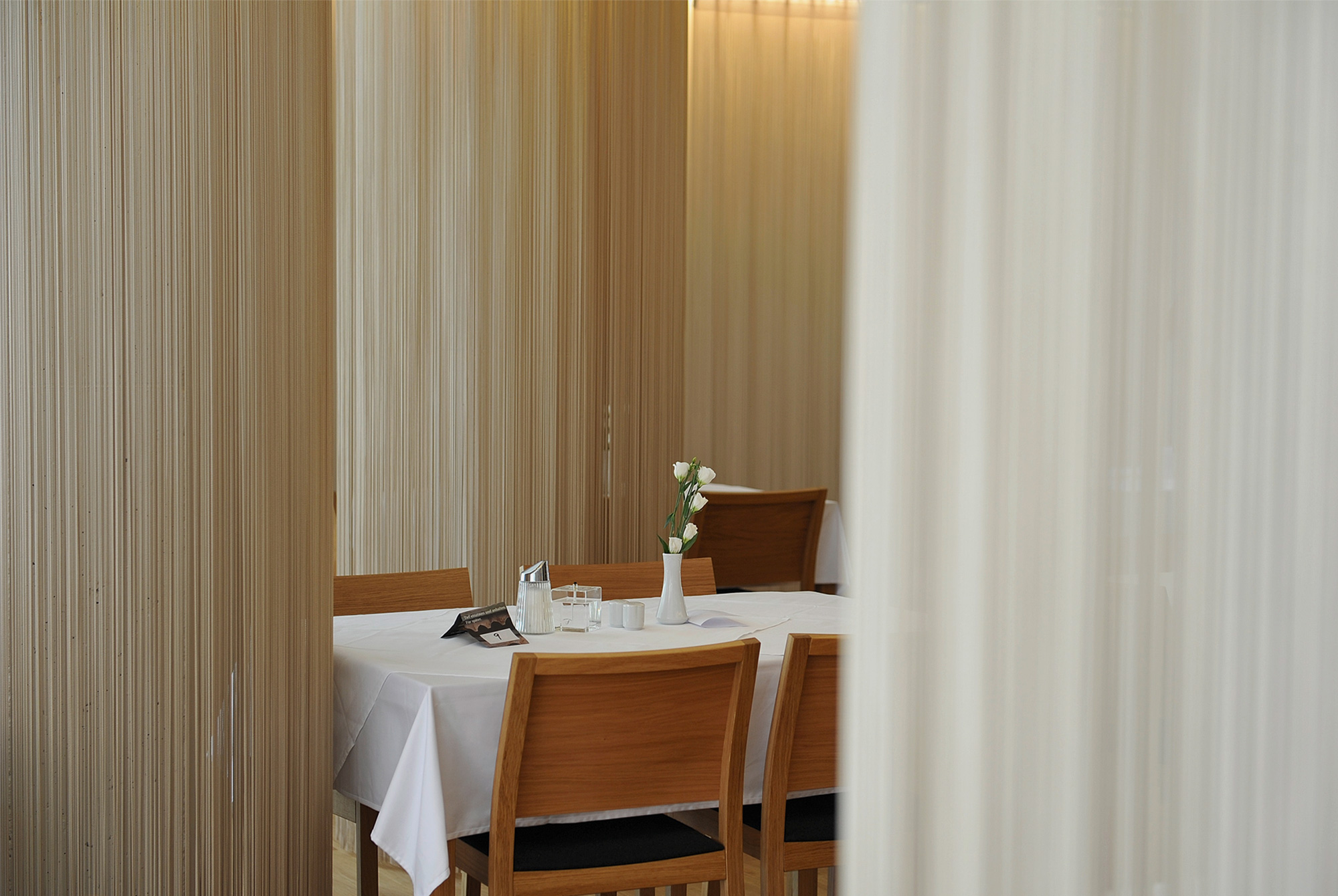 This is located in the middle of the market town of Matrei in East Tyrol Hotel Hinteregger. The modern building is surrounded by the mountains in the Hohe Tauern National Park and rural areas. Katharina Hradecky has been running the hotel with passion and charm since 2003, since the hotel celebrated its 100th anniversary. Much has changed since then, but her passion and zest for action have remained. 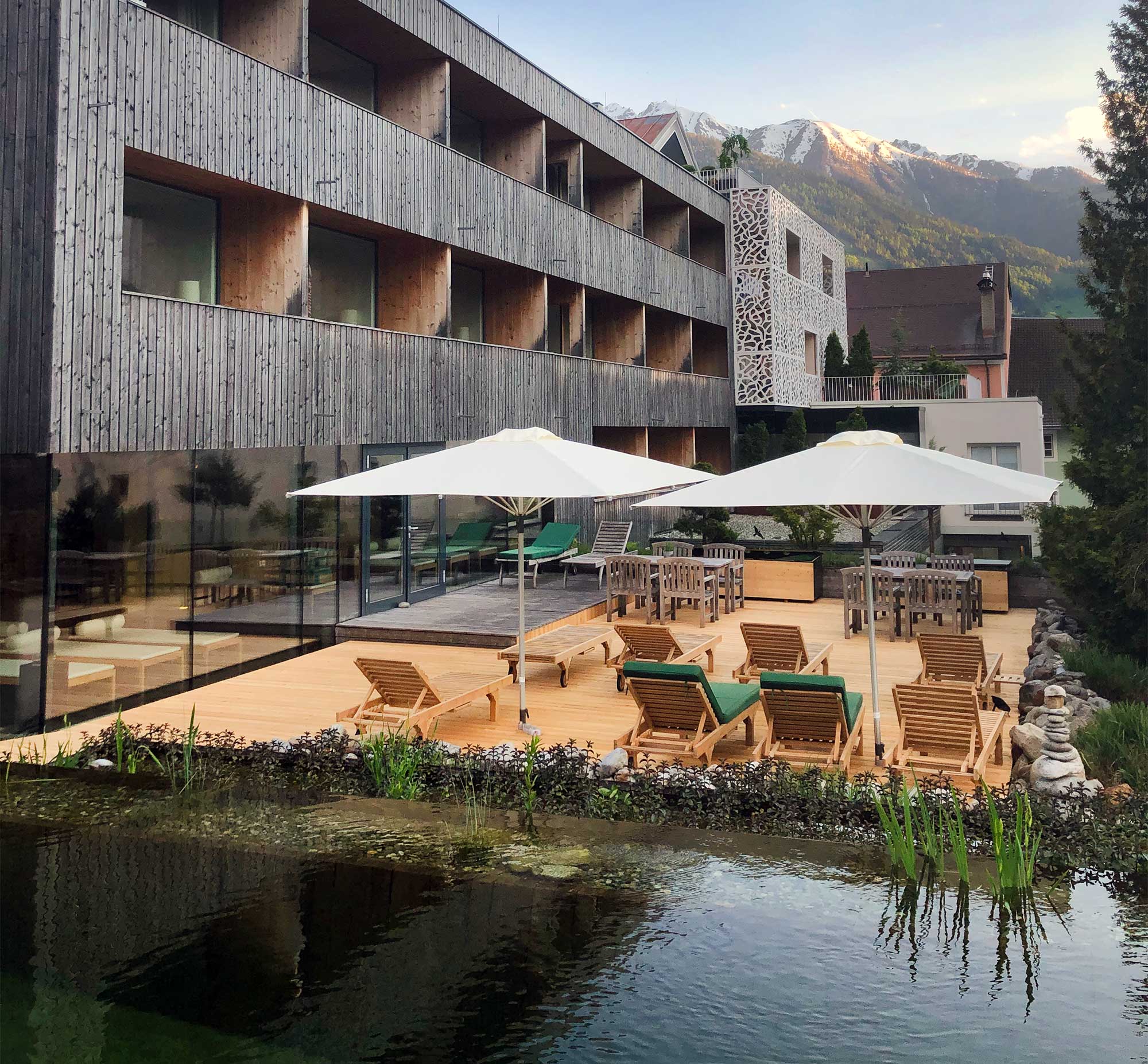 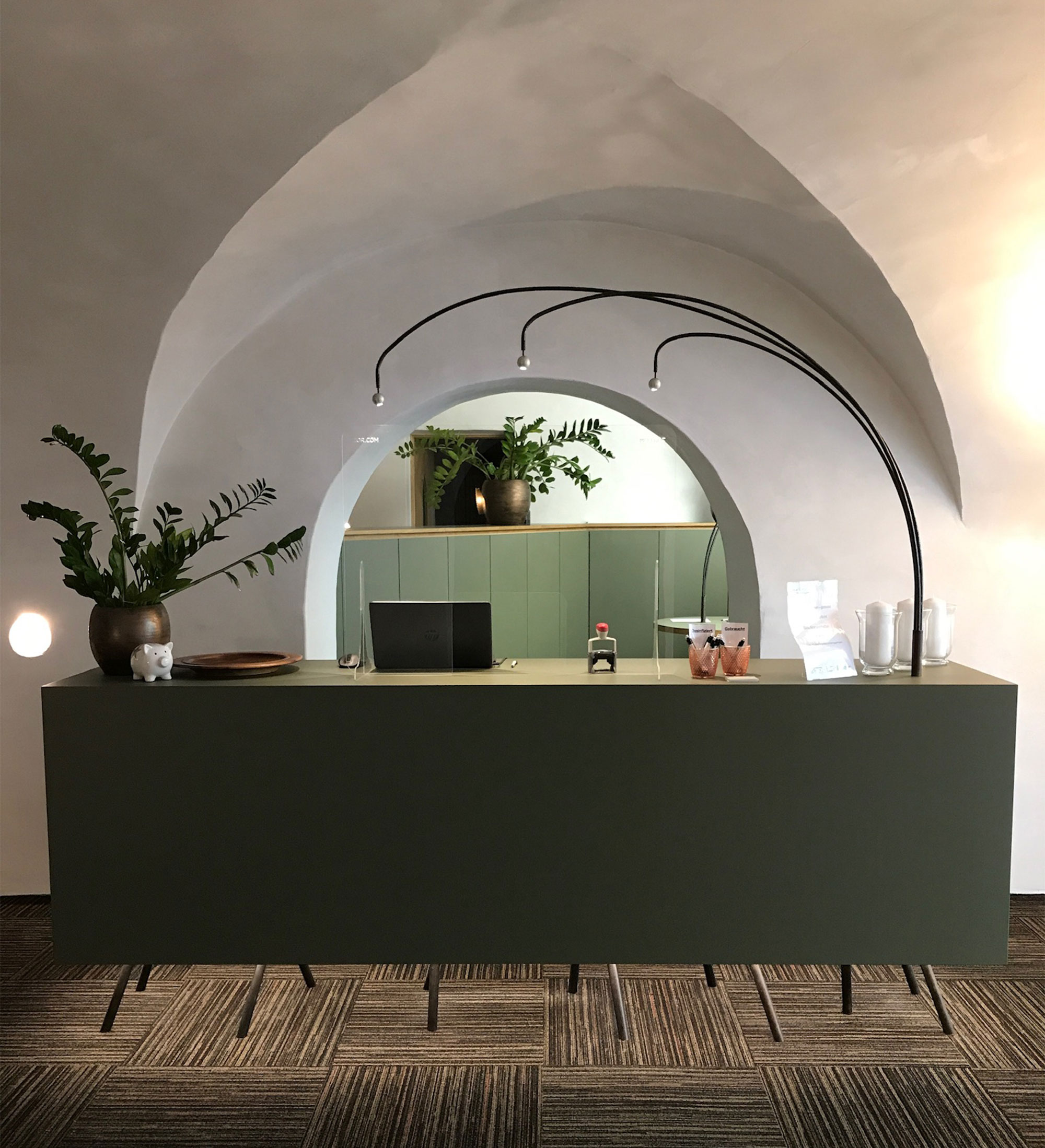 I meet Katharina for a personal interview, in which her husband Bernd Hradecky is also present. The Hotel Hinteregger was the last stop of ours Stay in Tyrol, at least the last hotel we stayed in. The days there were a pleasure - for different senses: from the restful sleep in comfortable beds, the tasty food in the morning and in the evening as well as the sauna infusion scented with coniferous wood in the spa area with outdoor pool. No matter what time of day or night we entered or left the hotel, we saw Katharina, either behind the reception, in conversation with guests, in the restaurant or on the way to her own four walls, which are located in the middle of the hotel. She was always in a good mood and interested in what we had experienced. Of course there was something exciting to report from every day E-biking through to paragliding.

“Build on the tried and tested and think about the future. Remain true to yourself and your principles. See the world with open eyes. Act with passion and be innovative. Create something special and be extraordinary. Radiate competence and arouse emotions. Look ahead. Direct, personal and at eye level. " - Hotel Hinteregger

The Hotel Hinteregger has existed for four generations and can be described as an integral part of the market town. In the past, the residents of Matrei in East Tyrol liked to come to where the Hinteregger's restaurant is today, because there was a popular cinema there. But the tradition of weekly visits has not waned, and so locals stop by for the regulars' table every Friday. When eating in the restaurant, due to the large window fronts, which offer a privacy screen through curtains, you have the feeling that you are participating in village life, you see residents: parking inside, walking to their houses or coming to Hinteregger. Speaking of the restaurant, guests are given an assigned table that they keep during their stay and throughout the regional, down-to-earth dishes. Every morning a morning mail awaits you at the dining table with a positive saying for the day, stories about the area and news from the house. 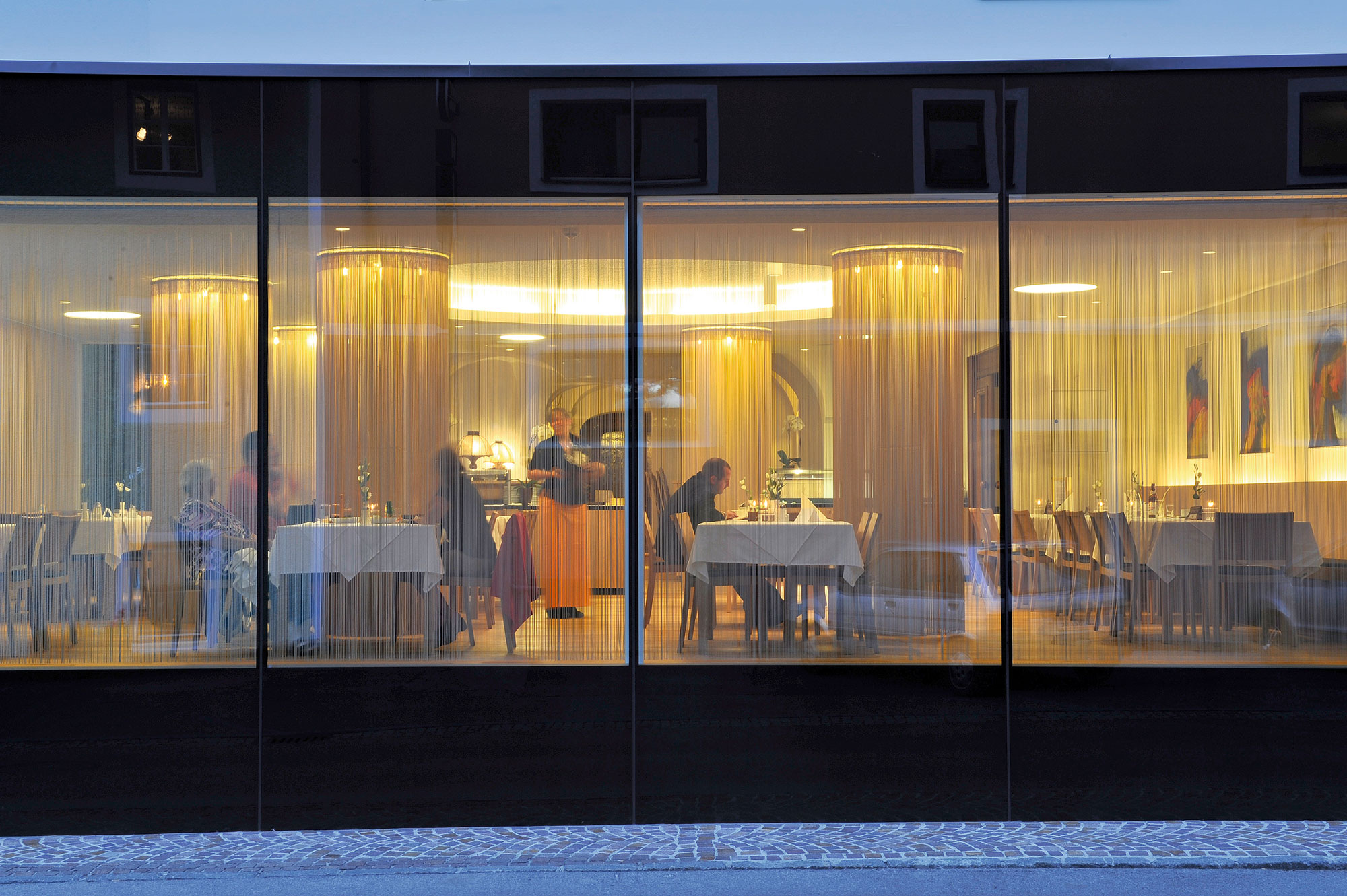 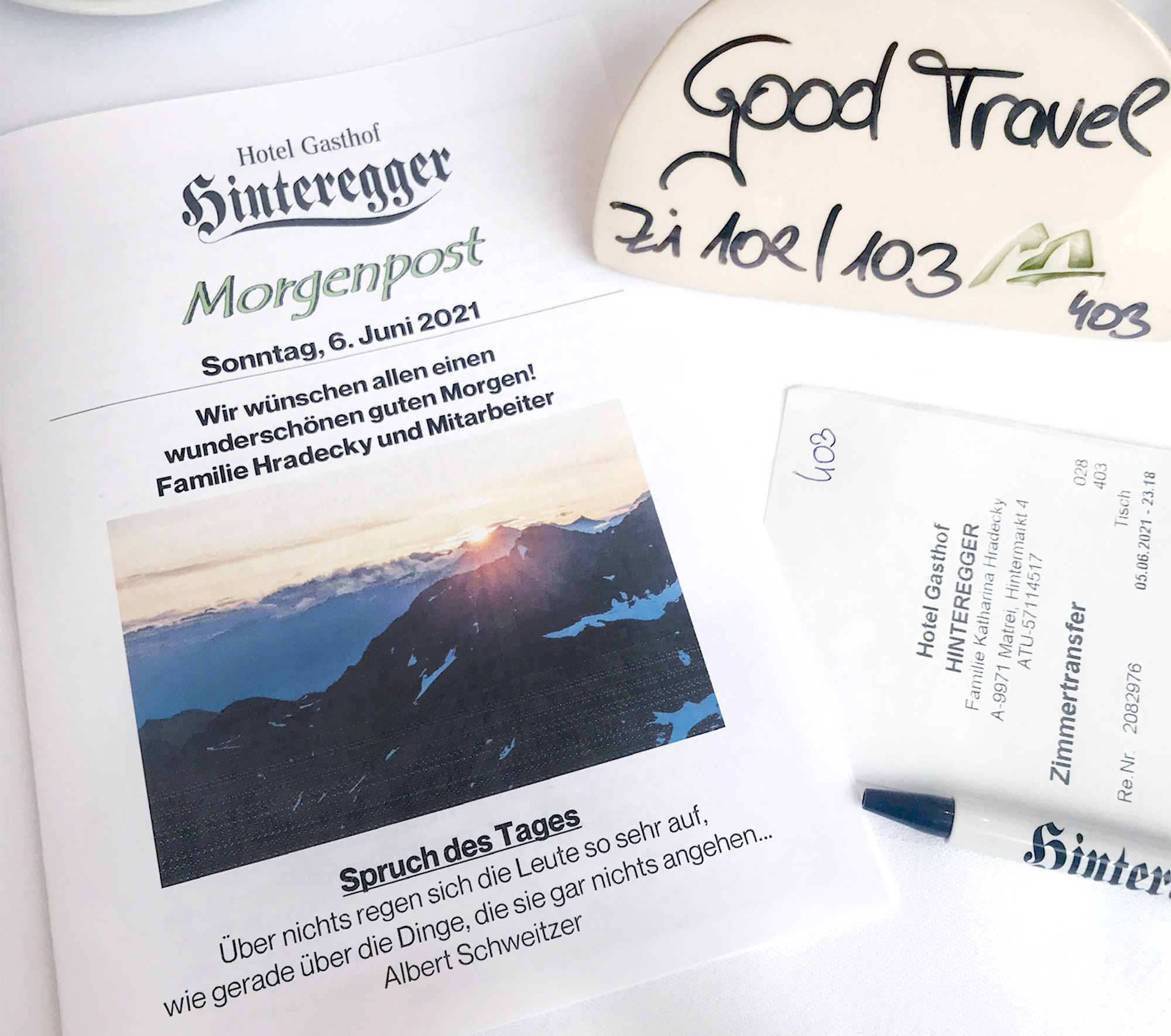 Familiarity through and through

The hotel lets guests feel that the Hinteregger is a house full of history. And that families were at work there and are still at work today that people are pooled and each other is helped. Katharina's parents, for example, still help with the potato harvest when they are retired, and the guests receive a farewell gift that her sister, who is a carpenter, made by hand. The family and especially the women from Hinteregger are also known in the village. They are committed to protecting today's Hohe Tauern National Park, although power plants were once planned. At that time, the local women went to parliament to stand up against the building. So did Katharina's mother-in-law, who was in charge of the protest.

The inn has been in the family for over 100 years and has always been passed on to a daughter from generation to generation. Katharina wanted to take over the hotel since she was a child and is grateful that she got the opportunity, even though she has siblings. She was allowed to develop freely in the Hinteregger and implement her ideas. She received no pressure from her mother, but rather earned trust. She also passes this on to her employees because she loves to see how they develop. She especially likes to see this with young apprentices, who grow through positive feedback and are more and more confident.

For Katharina, strong women are important when they are allowed to pursue their wishes, but also have the courage to trust their gut instincts. In her opinion, self-confidence comes when you go your own way, which does not mean that you reject the family tradition, i.e. the takeover of the restaurant and hotel business, but rather take it for yourself and give it a personal touch. By following that, she says, strength follows. Which you ultimately need to pursue your own goals. Because that requires full commitment, the desire to do things well and new passion every day.

Led by women, accompanied by their husbands

Katharina repeatedly emphasizes how much support she receives from her husband Bernd and how important this is for her in her role. He didn't grow up in any hotel business, so a lot was new to him when the two of them got together. But over time he was also able to get more involved and incorporate ideas. For example, the idea for the natural pool that he initiated. Bernd is a veterinarian and also takes care of his own farm with cattle, agriculture with potatoes and the in-house bees. Guests can taste some of this at the breakfast buffet and in the evening from the various menus. You see Bernd again and again during a stay, because he asks the guests with interest and asks how they are doing. 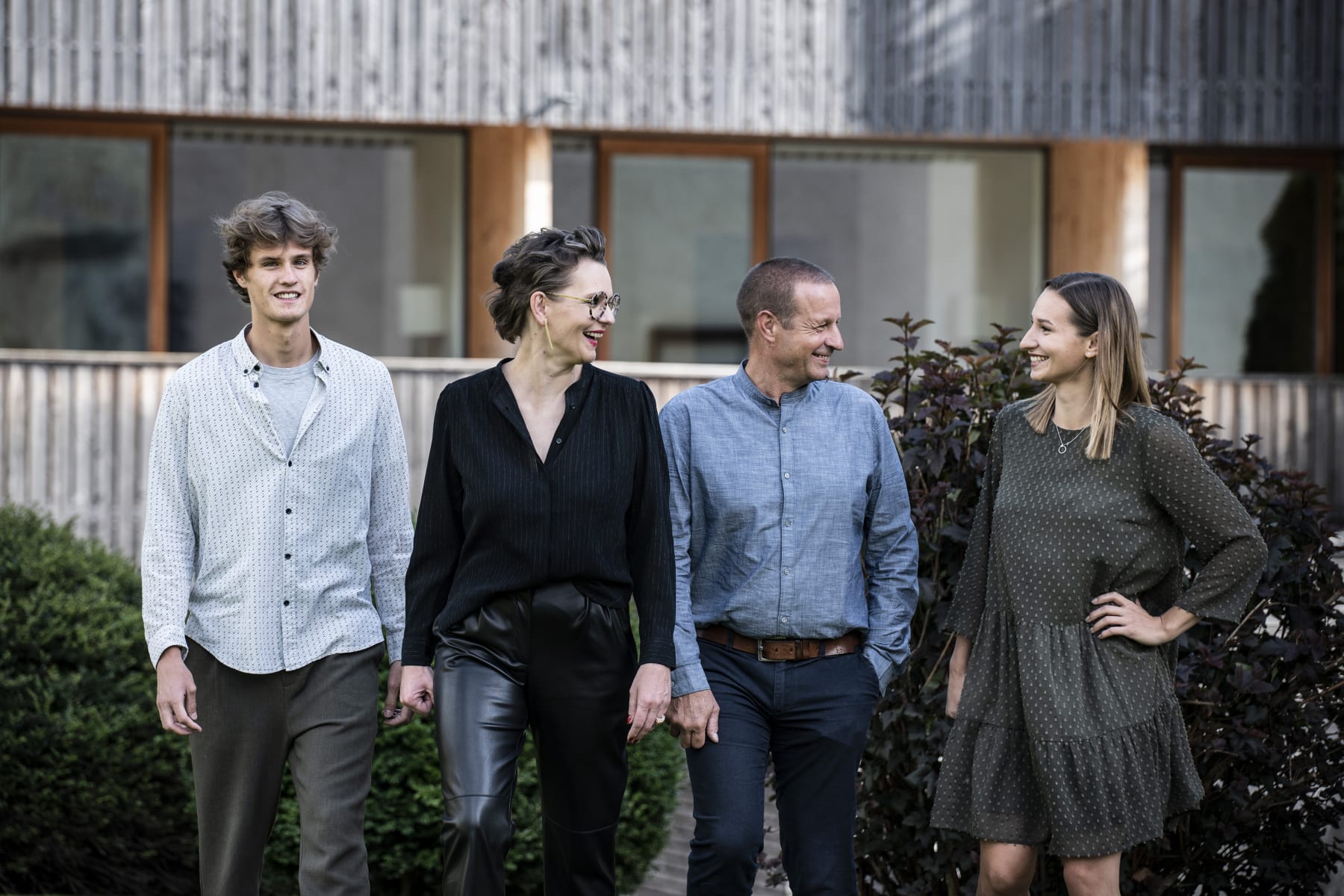 Katharina is also loving with herself, she radiates that and spills over onto her fellow human beings and employees. Katharina tells me that every evening she reads a book for at least an hour before falling asleep, no matter what time she makes it to bed. The lines read let them switch off, inspire them and ultimately the guests also benefit from it, because they find a bedtime story with every visit. Katharina writes this herself or prints some that she moved herself.

Mine was about that Paradox of our time. I didn't read them before going to bed, but rather lying by the pool during a break. The story got me thinking. It is about the fact that we humans today have so much more than all generations before, prosperity, means, possibilities, but with that we know a little less to begin with, because we are perhaps too spoiled, have to work less for things, value them less. After reading the story, I went to the sauna to reflect and relax. Katharina does that a few times a year when she finds the time. She also deliberately takes time off and travels within Europe. There she finds new ideas, which she integrates in the Hinteregger. 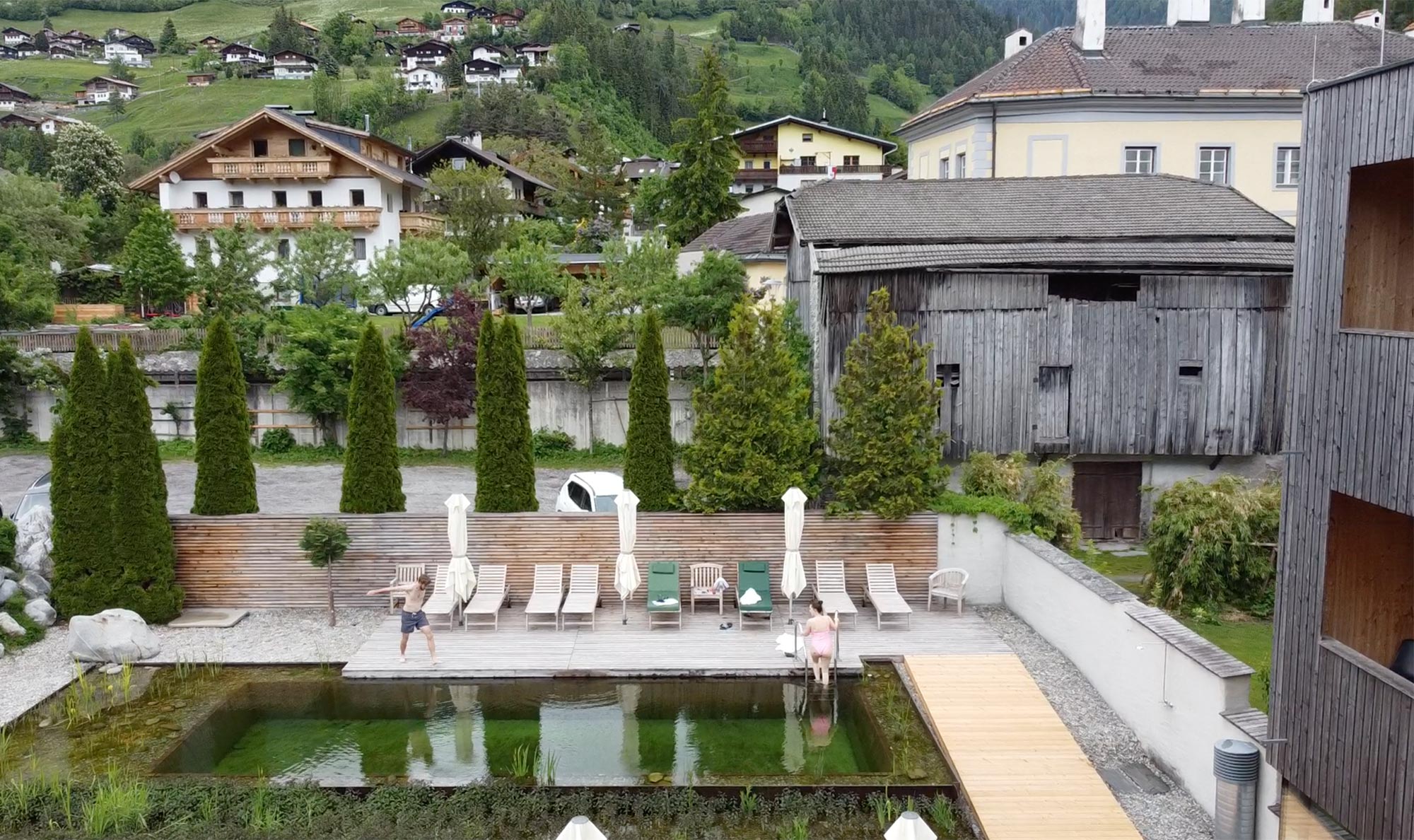 The urbanity of Matrei in East Tyrol meets the rural surroundings, which can be admired from the hotel in lush green tones. This mix is ​​also lived inside the Hinteregger by using “heart and brain” in all activities of Katharina and Bernd. 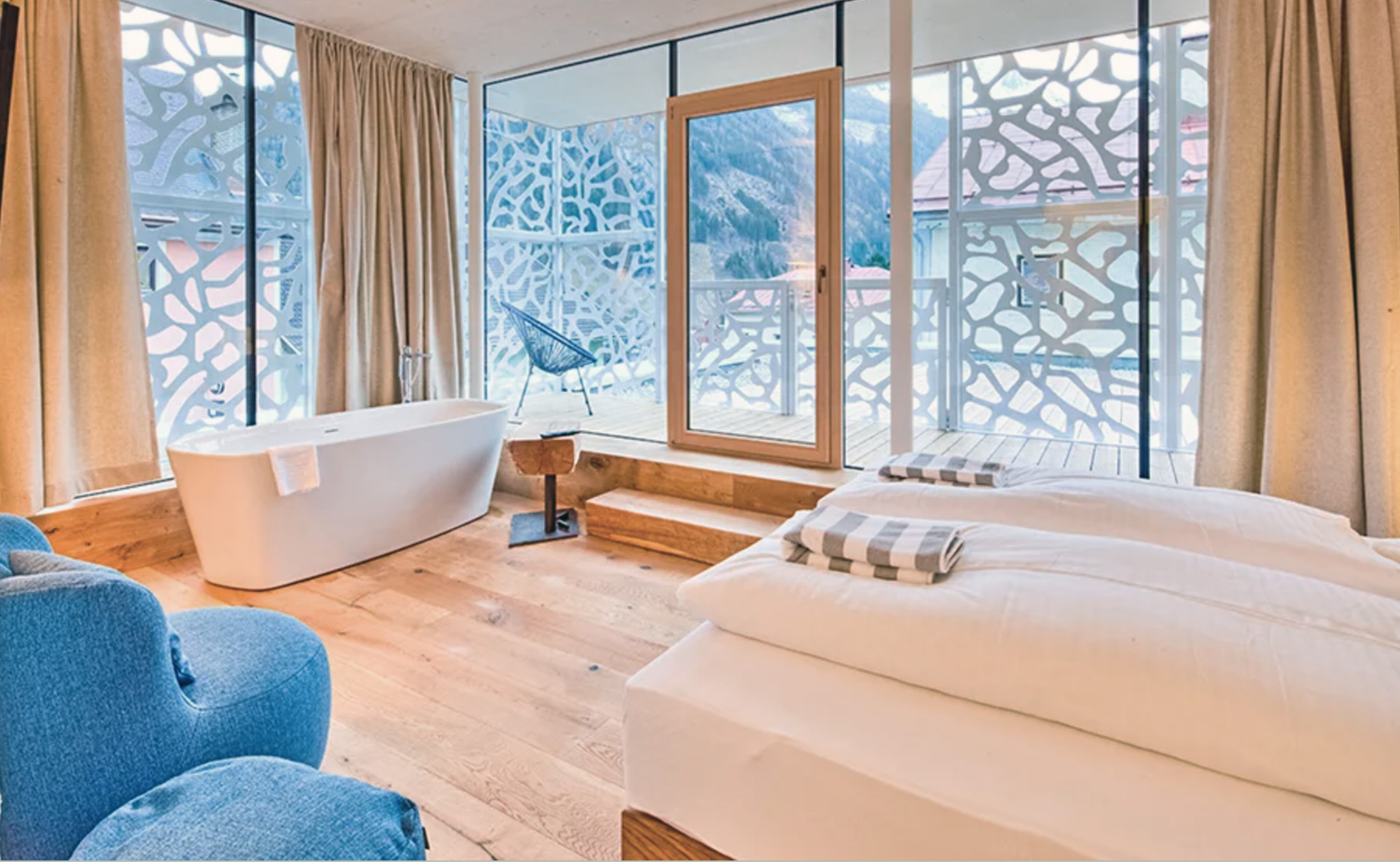 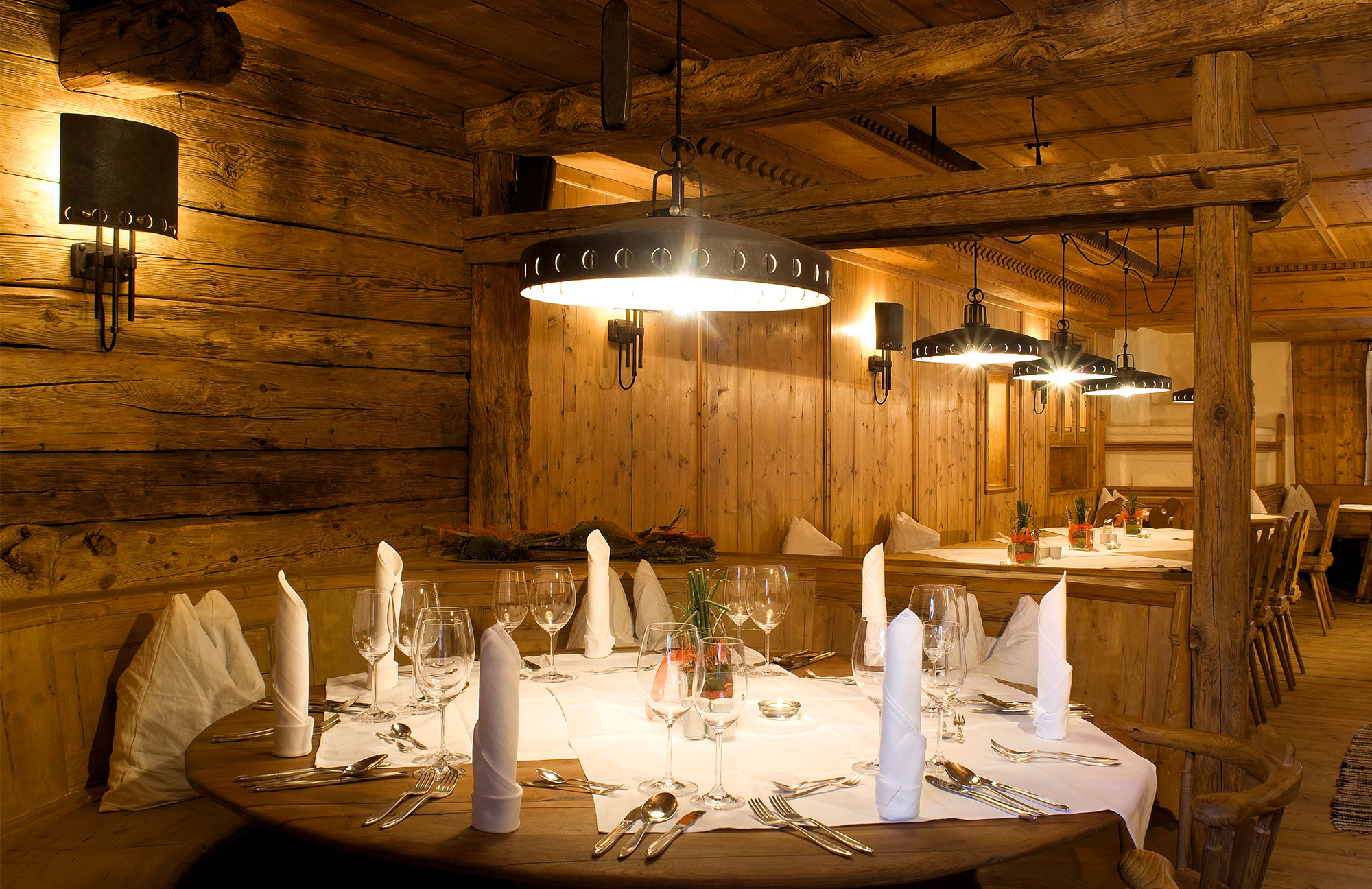 The best example of this is the new building, which was built as a symbiosis to the old building, so that the old building is not disturbed, continues to stand for itself and thus shows the tradition of the Hinteregger. The old building is adorned with old vaults, and the living room is still furnished as it was before and allows a journey into the past. The older rooms have been renovated and some of them still show furniture from earlier times. Due to the complex new building, guests can experience an uncomplicated transition from old to new and only notice it because of the design. There are also traditional pieces of furniture in the new building. For example, a larger chest that Katharina's grandmother used to transport her walkout when she took over the hotel. The new building can be recognized from the outside through an imposing privacy screen cladding. The rooms smell of wood and adorn a minimalist interior with design classics.

The Hradecky family builds on the tried and tested and does not lose sight of what is happening around the Hinteregger and tries to skillfully incorporate the influences. The result was a hotel with really special architecture and a feeling of wellbeing.

Sustainability has always played an important role at Hinteregger. The holistic, sustainable concept is reflected, among other things, in the company's own wood chip plant, which is fed from agriculture; and just as photovoltaics and solar thermal systems enable environmentally friendly and self-sufficient heating and energy supply. The natural pool is operated without the use of chemicals. Circular thinking has also been lived in Hinteregger for generations, especially when it comes to agriculture. Sustainable striving can be described as a dynamic process in which the hosts are well aware of the negative consequences tourism can have on the environment, but counteract them by using resources sparingly.

Of wind and future music

It is very important to Katharina that traditions are maintained and carried on. That is why she and the team are part of a procession that takes place three times a year. The employees: inside wear traditional costumes and dirndls, and while the procession with brass music passes in front of the Hinteregger, we as guests are also very excited to see what is going on outside. Katharina's mother is a rifle flag godmother and proud of it. Katharina wants to develop traditional things further. 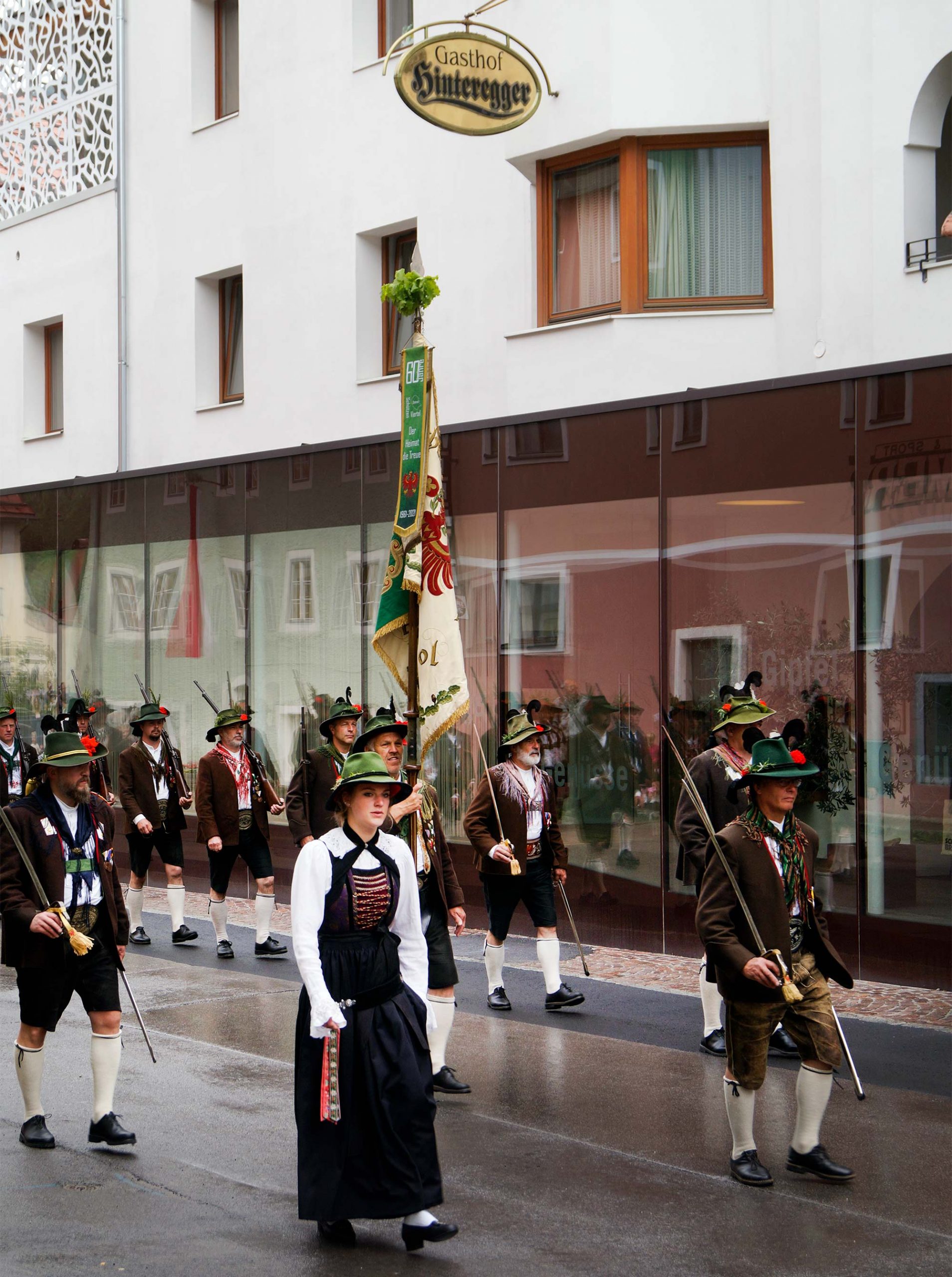 There are several plans for the future. But the corona pandemic did not leave Hinteregger without a trace, which is why they are taking the ideas slower. Katharina and Bernd are currently grateful that the hotel is open again and that they can finally welcome guests again. Christmas and New Year's Eve only had something nice with the family, but Katharina has been celebrating parties and holidays with guests in the hotel for as long as she can remember.

Zeitgeist as a guide

The hotel should go with the zeitgeist. Over the past year they have noticed how important regional tourism is, which is why they want to attract more guests from Austria, but also from Switzerland and Germany. They bought the neighboring house, which had been vacant and listed for several hundred years, knowing full well that the renovation will be a long project. There they plan modern common rooms because they also notice that guests come to work in Hinteregger. Behind the natural pool there are plans for an infinity pool, which, in contrast to the natural pool, should be available to guests all year round. Fast charging stations for e-cars are also being planned.

The new ambitious plans aim to ensure that guests can experience more comfort and appreciate the hotel as a special place to stay. The dream of the future could also be that daughter Victoria will take over the hotel business, but she is currently still studying and is free to decide whether she would like to run the Hinteregger in her style. But who knows, maybe their son Max will also take over the business or the two of them will take on the challenge together. In any case, it is clear that the Hinteregger will stay in the family and that the hotel can develop further, with guests, society and climate change.

More information about the You can find Hotel Hinteregger here

What are your favorite activities in your

Meet the owner 🧡Anke & Robert It was love

Lisa, who herself comes from the Allgäu, describes

and by the way, today is mother's day 🧡 moms sin

The renovation and design of the ROSSO reflects

The ROSSO is the perfect place to arrive: Correspond