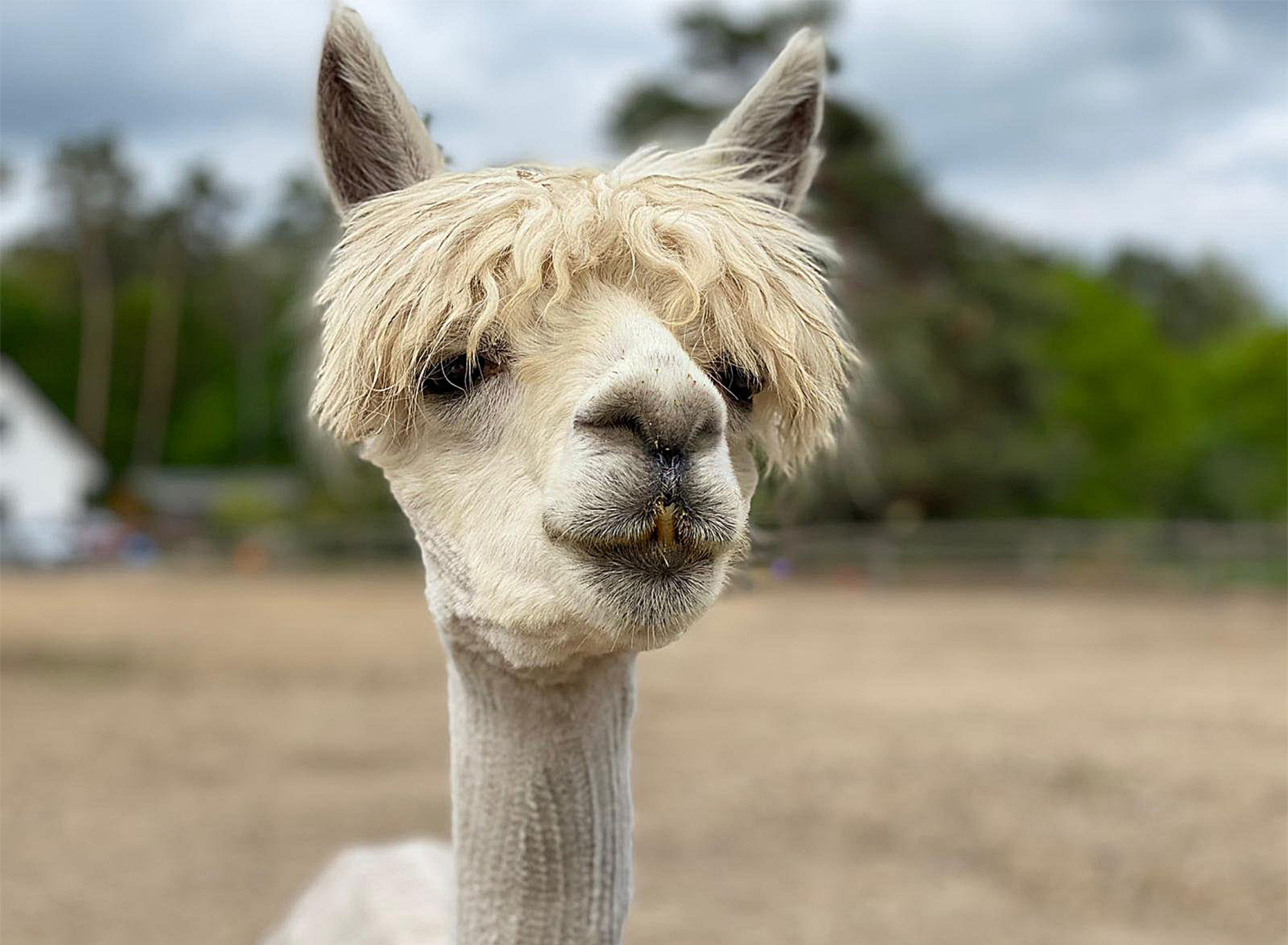 Alpaca tour in Pausin: A trip to the "dolphins of the pasture"

Annelies and Achim Liesegang have seven children, six grandchildren and eleven alpacas. A workload that the sympathetic retired couple seems to be able to cope with easily and that also keeps them young. Between Spandau Forest and Potsdam is the "Alpakahof Pausin", I have made a note of the place with the mnemonic "take a break". When we drive past the "Auszeit" bistro in town, I have to smile and the anticipation of the booked alpaca hike increases. Even the parking lot in front of the Liesegangs' four-sided courtyard is idyllic. A rustic, ornate wooden seat (by forester and wood sculptor Jörg Richter) indicates that the beautiful Havelland cycle path leads past here. When entering the site, the freshly clipped even-toed ungulates are already looking curiously in our direction. It's not my first alpaca tour, but the fascination is always the same. There is something about these camel-related animals that appeals to many people. And the popularity of alpacas continues unabated.

Achim Liesegang, an agile 73-year-old pensioner, is already scurrying around in the pasture and providing the animals with harnesses and leashes. We participants all speculate which animal we will be assigned or who we would like to accompany on a walk together. On another tour, I was told that the animals would choose their companions themselves and that says a lot about human character.

Maybe, but Achim allocates the animals wonderfully pragmatically, just by eye and size. To their great joy, the children in the group receive the cute foal and its mother. I get the only stallion in the group - XNUMX-year-old Lukas - whose gray and white coat has some pretty black spots on it.

Before we go for a three-quarter hour walk and then feed the animals, Achim talks very briefly about the origin, breeding and habits of the alpacas. They are generally very frugal and adaptable. Coming from the Andes, they can withstand temperatures down to minus twenty-five degrees because of their special fur, but they can also withstand strong UV radiation, which is common in the highlands. In addition, the animals are vegan and ruminant and were domesticated by humans over six thousand years ago. The high quality of their wool in particular makes them lucrative farm animals.

While the llama is primarily used as a beast of burden, alpacas are bred for their wool. For the Incas, an alpaca coat was considered a sign of wealth. And even today, the wool of the alpacas is considered to be of particularly high quality. It insulates well, can absorb a lot of moisture and is also suitable for allergy sufferers. Since the 1970s, the animals have therefore been imported mainly to Europe and New Zealand. However, the largest inventory is still in Peru. 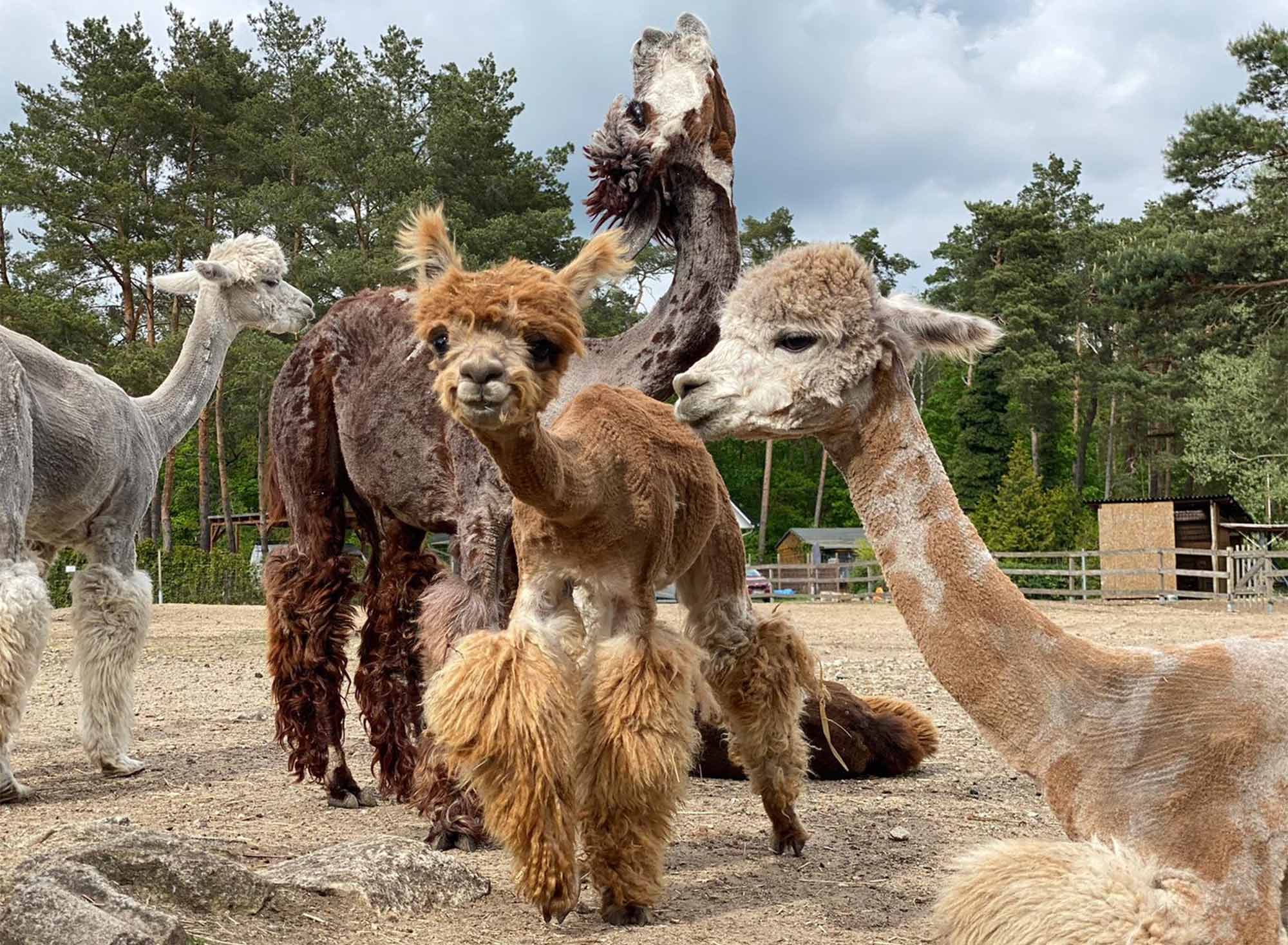 By the way, the popular “pony hairstyle” of the animals is not a fashionable frill.

Since alpacas don't lose their fur by themselves, they have to be shorn every year to avoid possible heat build-up in the warm months. Achim says very openly that clipping was a lot of stress for the animals and for him, which is why he hired a professional clipper for a few years. By the way, the popular “pony hairstyle” of the animals is not a fashionable frill. As with all prey animals, it protects the sideways eyes from annoying insects.

Achim reports that there are also critical voices from animal rights activists regarding the species-appropriate husbandry of the animals. He read everything about keeping alpacas before he bought the animals and regularly exchanges ideas with other keepers. The veterinarians also have to undergo further training, since this species of camel does not come regularly to the consultation hours. During my three alpaca hikes, the animals on the farms were always spoken about with love and respect. And the alpacas apparently had enough space to run around and retreat.

In theory, anyone in Germany could keep alpacas if they comply with certain requirements regarding the size of the enclosure. Since the animals in Germany are mostly used for hobbies, the quality of the housing and the well-being of the animals is of fundamental importance for the pet owners.

Despite their appearance, alpacas are not cuddly toys.

Despite their appearance, alpacas are not cuddly toys. On the contrary, they are so-called distance animals and rather shy and reserved. And indeed, the alpacas walk next to us quite calmly at a reasonable distance, and only after a certain getting-to-know phase can I stroke Lukas' neck. As soon as he has had enough, he withdraws and keeps his distance again. In peaceful coexistence we both walk along the forest path. When we lose touch with the group, I start trotting. Funnily enough, he also trots along, and when I start to laugh, he gives me a slightly irritated look, which almost makes me laugh even more. Probably a purely human interpretation of his gaze, and my laughter was just too loud for him.

So I'm quiet again and then really enjoy our silence together in the forest. Achim tells us that school classes usually arrive at the farm quite excited and that there is sometimes a bit of a fight over the animals. But at the end of the tour, the teachers would often hardly recognize the children because they walked calmly alongside the animals and peacefully took turns holding the leash. 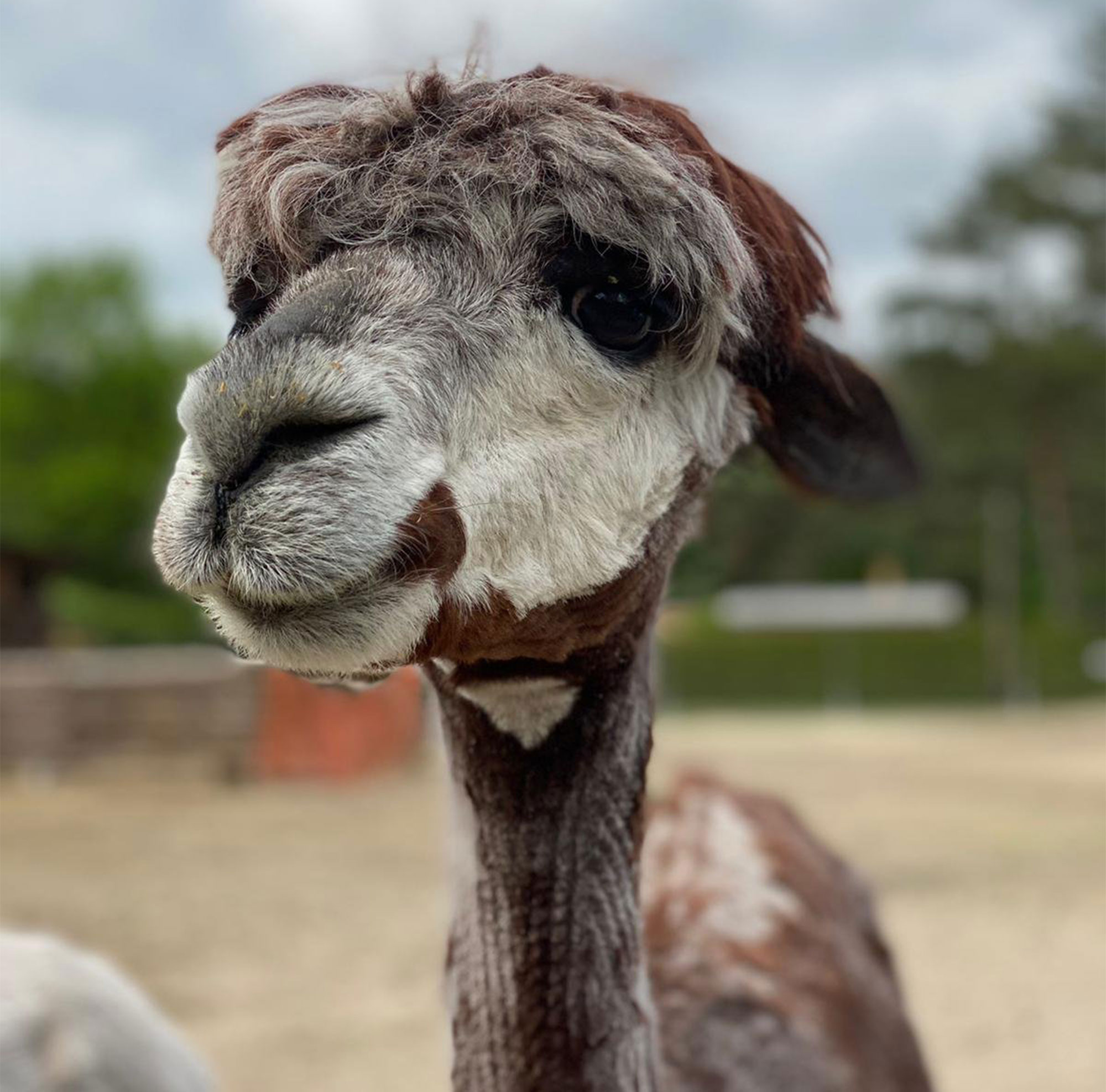 There are no fat alpacas

Since alpacas are harmless, the hikes are also suitable for small children (from the age of six). Alpacas don't have teeth on their lower jaw, they have a chewing plate. But like their relatives, they can spit. But even that rarely happens and usually only when there is a fight over food - because alpacas are very greedy. My saying of the day: There is no such thing as a full alpaca. And so the alpacas stop again and again during the walk to eat something along the way. Some things don't suit them well, such as ivy and heritage. That's why I try to stop Lukas from eating greens that I can't identify - with rather moderate success.

Achim, who is a civil engineer by training, then tells us how he came across these animals in the first place. The driving force was his wife Annelies, daughter of farmers with a special connection to animals, who fell in love with the alpacas at an agricultural fair. It would be a while before she could convince her husband to buy a pair for the farm. It was a purely private hobby for her.

When an elderly lady from the neighborhood wanted to sell her adjoining land to the Liesegangs, one thing led to another. They bought two animals from a breeder friend of theirs. A few weeks later he came by with a trailer and brought eight animals with him. Due to renovation work on their own farm, he asked the couple to take care of the other animals temporarily. Since the Liesegangs are used to a full house, they didn't think twice and agreed - the rest is history. The alpaca guests stayed in the yard. Today, the Liesegangs have nine mares and two stallions and regularly offer hikes with the animals. You can celebrate birthdays or company parties at the "Alpakahof Pausin", there are winter hikes with bread on a stick and mulled wine, farm festivals with rock music, which Achim likes, or yoga with the alpacas. The animals watch with more or less interest during the asanas and eat - what else? 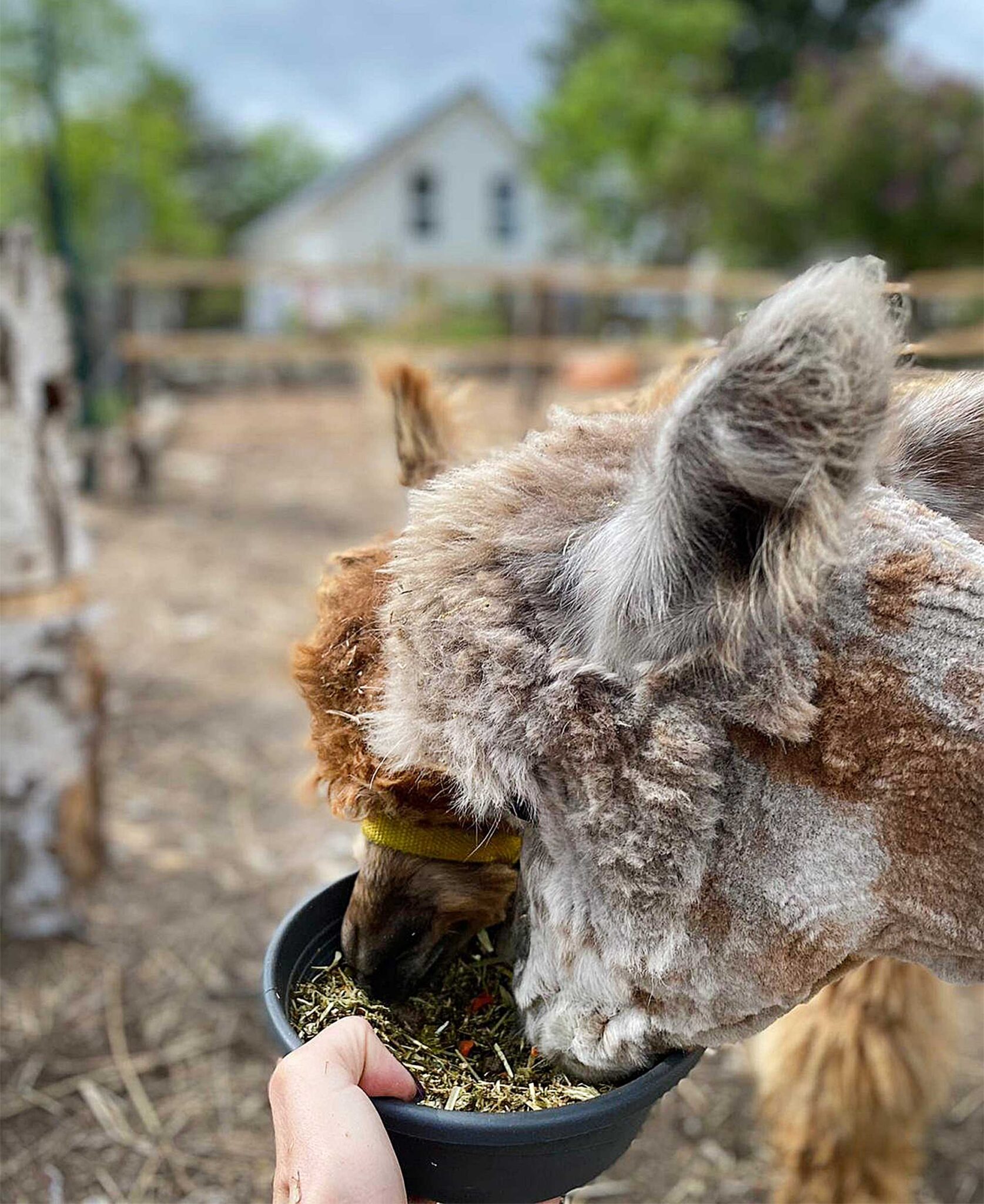 None of this was planned, and yet everything fits together well here: the relaxed and down-to-earth nature of the Liesegangs, their hospitality and their sense of humor. The relaxed animals in whose presence one relaxes oneself. Alpacas are also used in animal-assisted therapy because of their calm and peaceful nature. And that's where the perhaps somewhat strange comparison with dolphins comes from, which is said to have a therapeutic effect on people who are sometimes seriously ill.

After two hours on the farm and a belly full of homemade cakes, I happily return to the city and keep telling me about the extraordinary and funny moments with "my" alpaca. If you don't want to go back to the city yet, you can stop not far from the farm on the way back Anna's house spend the night there and end the day in the garden and ponder the "dolphins of the pasture" again.

Thanks to the Liesegang family, Lukas, Fleckchen, Chocolat, Mathilde and the others for the beautiful day. There is more information here . 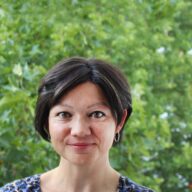 Geraldine works as a freelance writer for Good Travel and has just completed training as a sustainability manager. After twenty exciting years in film, she now devotes herself full-time to her other passions - travel, food and design.

Magazines made for you.

Five places you can travel by night train

5 places for your next retreat