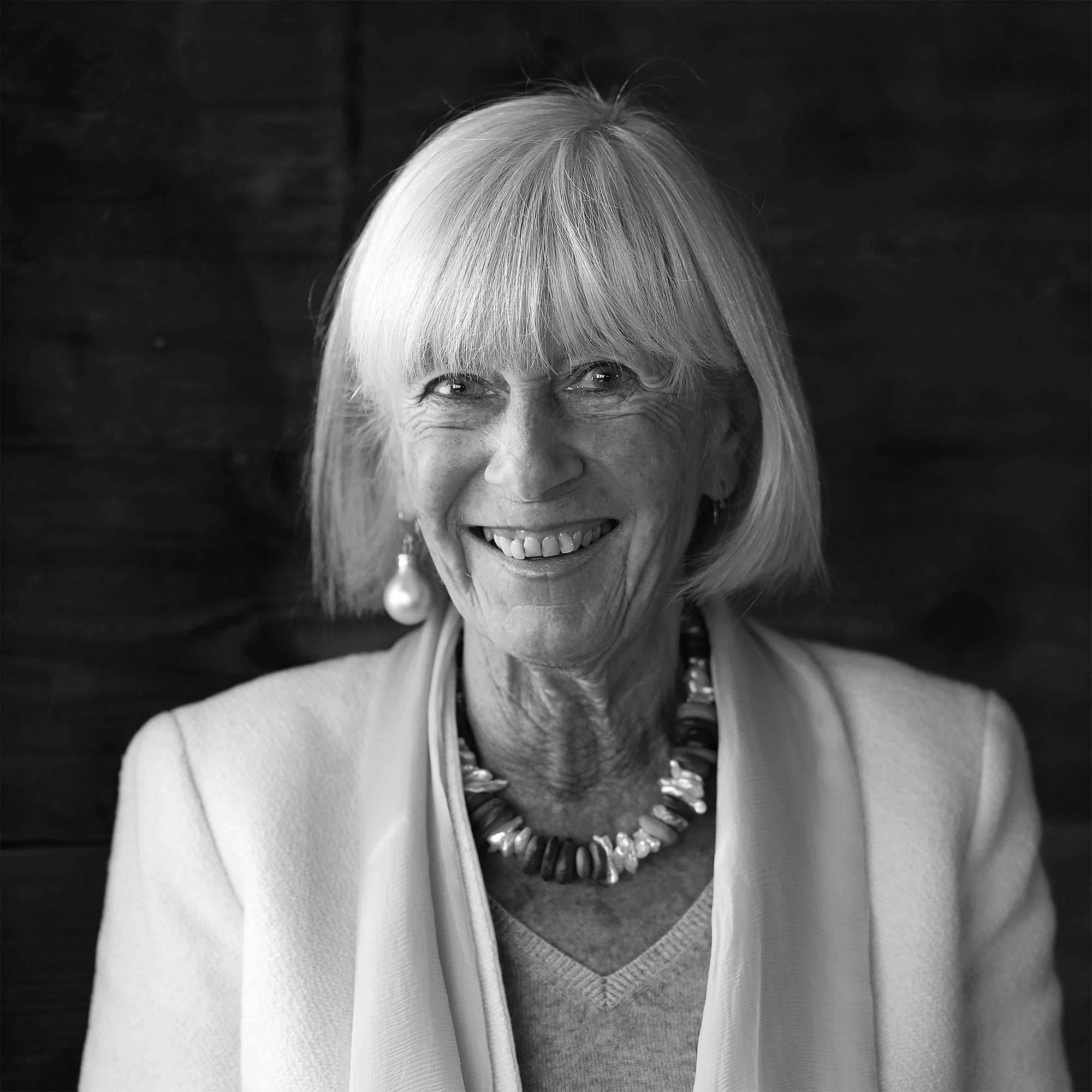 Sabine Bertin and the Rössli Mogelsberg - love at second sight

Sabine Bertin is not only manager and host of the Rössli Mogelsberg, but can also be found at the hotel reception; she also takes care of e-mail communication, reservations and bookkeeping, she helps out in the service of her own restaurant and takes over the kitchen planning. She can therefore be described as a true all-round talent who keeps track of the upcoming tasks and coordinates the more than 20 employees - and has been doing so for 44 years. But back to the beginning and the year 1978. To a young woman who lived in Zurich and had the dream of opening her own small restaurant. 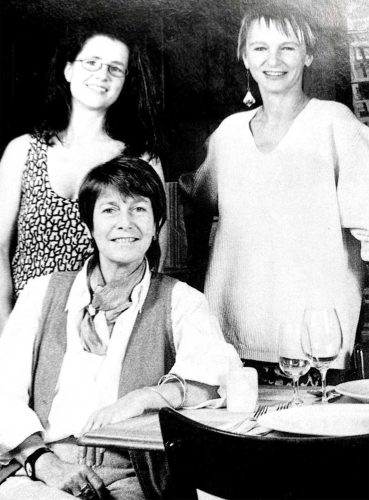 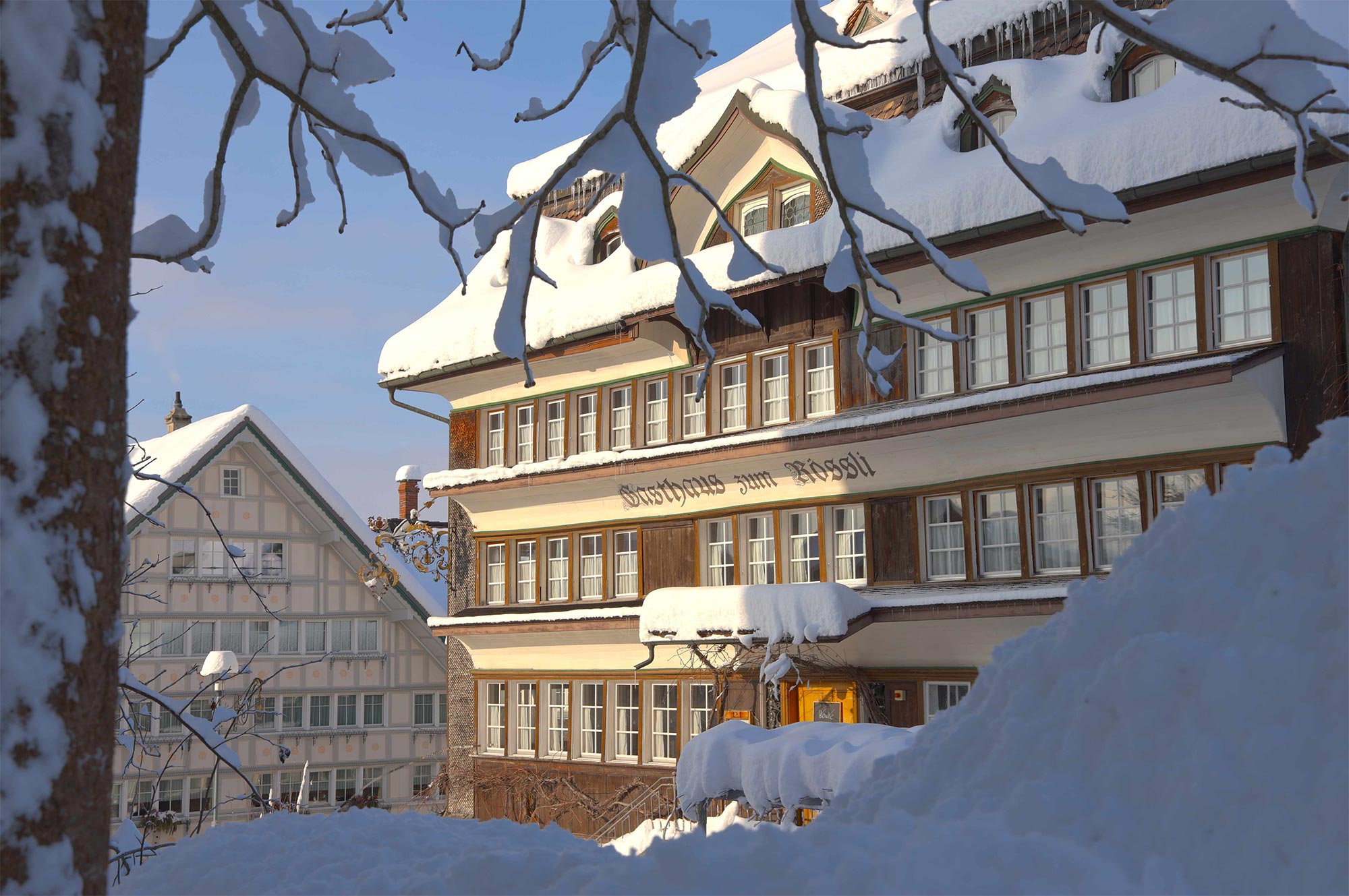 Working together to make your wishes come true, that's the idea

As is well known, desires become concrete when you talk about them and share them with others. That's what happened to Sabine and her then husband, who talked to friends and thought about how they could get together to buy a large building together - the idea of ​​buying a factory or something similar was in the air to place offices, practices and studios in it, because the group consisted of 20 artists, lawyers, doctors, psychologists, careers advisers and entrepreneurs. The centerpiece of this large building was to be a restaurant that Sabine and four others from the group wanted to open and run.

While looking for a suitable building, a friend and member of the "Restaurant Group" got the tip that the Rössli in Mogelsberg was for sale. Sabine's first impression was less positive because Mogelsberg is over an hour from Zurich and was too small and conservative for her. However, the other four from the group were able to persuade them to at least give the Rössli a chance and so they set off by car to visit it.

In Mogelsberg they met the innkeepers who Sabine found very nice from the start. But compared to the innkeepers, she didn't like the Rössli at all: she felt it was too huge and powerful. There were also rooms that were to be rented out and a large hall on the second floor - Sabine, on the other hand, wanted a small, fine restaurant with a manageable dining room. In terms of atmosphere, the object was far away from her actual wishes and ideas for her future place of life and work. 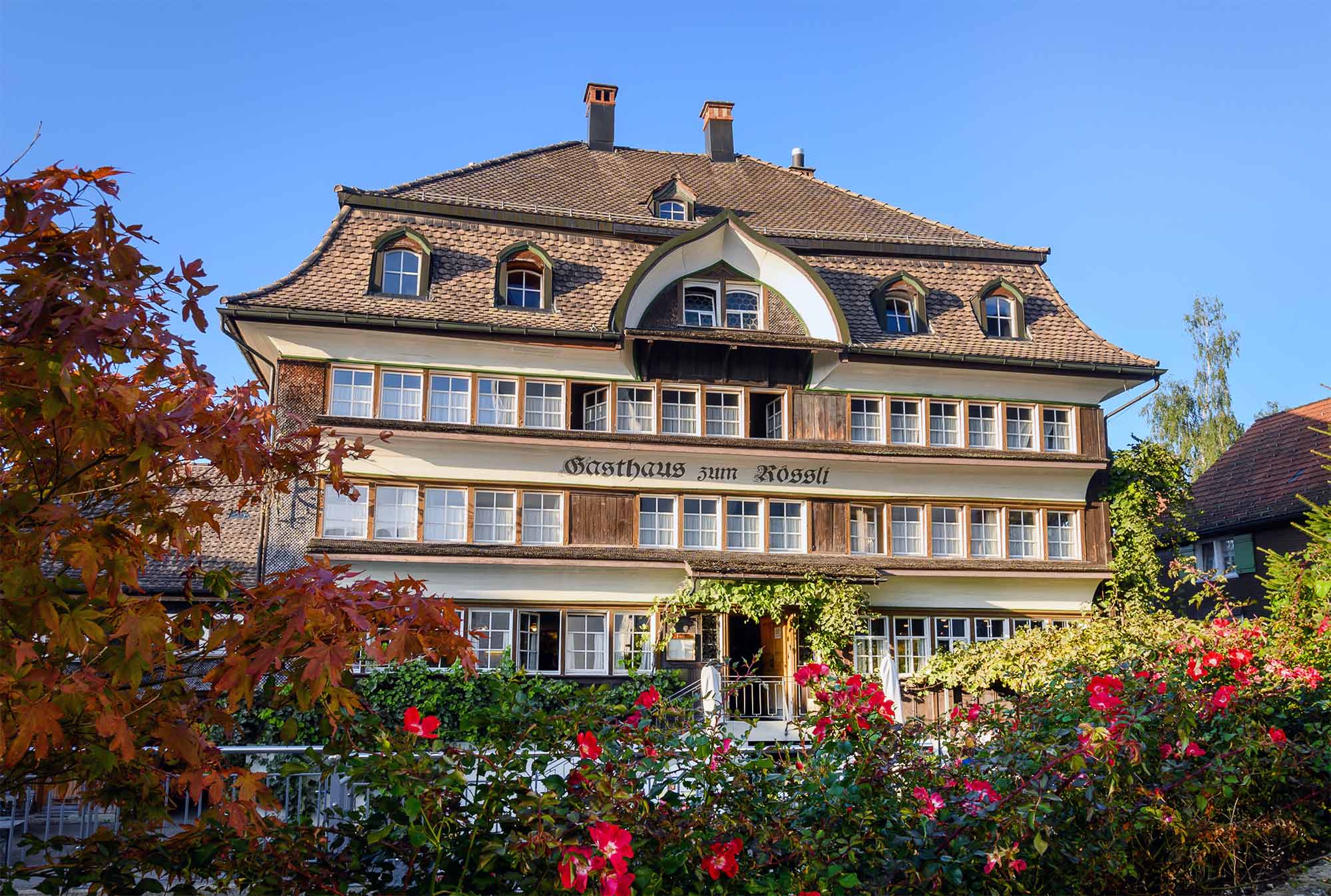 But a quick decision had to be made. The group managed to persuade Sabine again, and together they bought the large, magnificent horse. From November 1978 until Christmas, the time was used for renovations and a place was created for the group to live there. They also extensively expanded the attic.

From 1979 the hotel and restaurant business started. Over time, Sabine discovered that the house is full of soul and that it gives her an incredible amount of energy and strength to this day. But her decision was put to the test when, after eight years at the Rössli, she received an offer to take over a restaurant in Zurich's old town with a friend. When she saw the ancient restaurant for the first time, in which Goethe is said to have frequented, she could not believe her eyes, because everything was exactly as she had always dreamed of: small, warm and without a room. This possibility brought great turmoil and uncertainty into her life and she challenged the status quo.

Through silence to the decision

Since words and discussions did not lead to a decision, another plan had to be found. Sabine decided to attend a Buddhist Zen session. She was to be silent for ten days. She uses this time to listen and feel into herself. She didn't want to be distracted and make a decision that came only from within, without influencing others. During the silence she got an image in her head: The Rössli could be seen on a hill and shone brightly into the distance, at the foot of the hill was Zurich, which seemed gray and gloomy. This image and the period of silence formed the moment of their decision. A decision for life in the Rössli. On the last day of silence she knew: she will stay in Mogelsberg.

"I didn't find the Rössli, the Rössli found me." - Sabine Bertin

Sleep and eat according to the zodiac signs

In her younger years, Sabine dealt with astrology and the 12 principles of the zodiac. For her, these principles were a great system for explaining the world, because she thinks they can be applied to all areas of life, including colors and tastes, for example. Accordingly, she designed the colors and furnishings of the rooms in the Rössli, but also the choice of gourmet menus, which change every month with the zodiac signs.

Since September 24, guests of the hotel have been enjoying the Libra menu. Matching the zodiac sign, there is a colorful menu that provides a certain "wow effect" and caters to the artistic streak of Libras. They are mediators, harmonious, seek balance and have a sense for the beautiful and special. For this reason, no champagne should be missing from the menu. The individual courses are not only beautifully prepared, but also taste great. The dishes include a light vegetable terrine with a colorful leaf salad, freshly roasted porcini mushrooms on a champagne risotto and vegetable bags made from bric dough on a pepperoni cream with "Spätzli" and autumn vegetables. 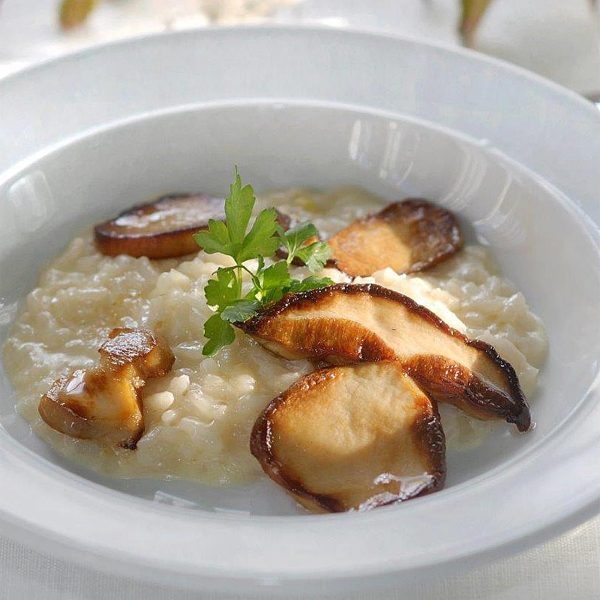 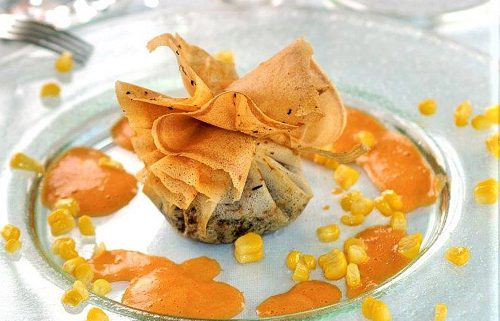 In the "bull room" there is a 350-year-old wooden floor, as well as four beds, because bulls are family people and can therefore spend the night with their loved ones in the Rössli. Since bulls are herd animals that are very traditional and connected to nature, Sabine chose an old chest that serves as a cupboard and a green shower that is supposed to look like a spring meadow. 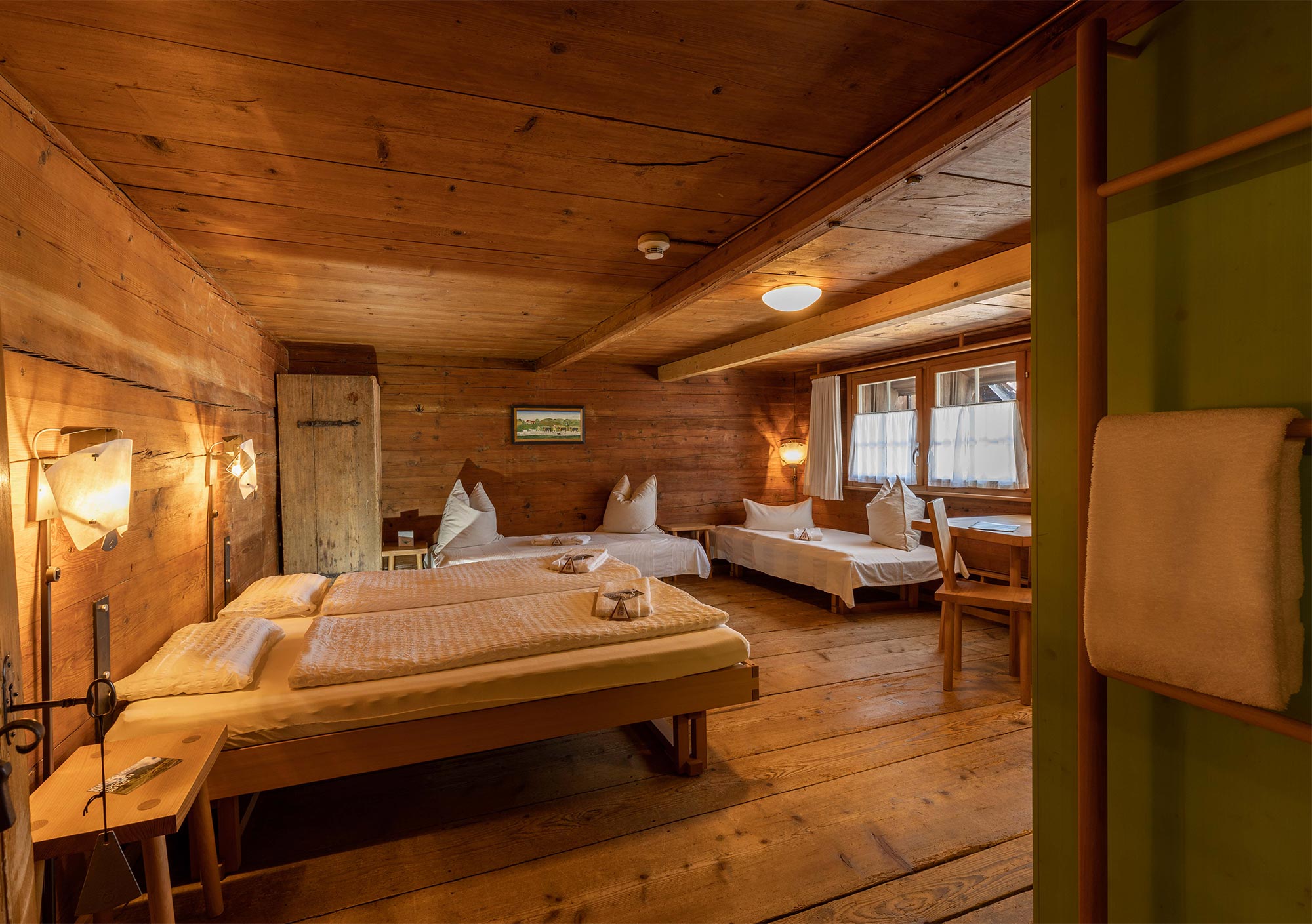 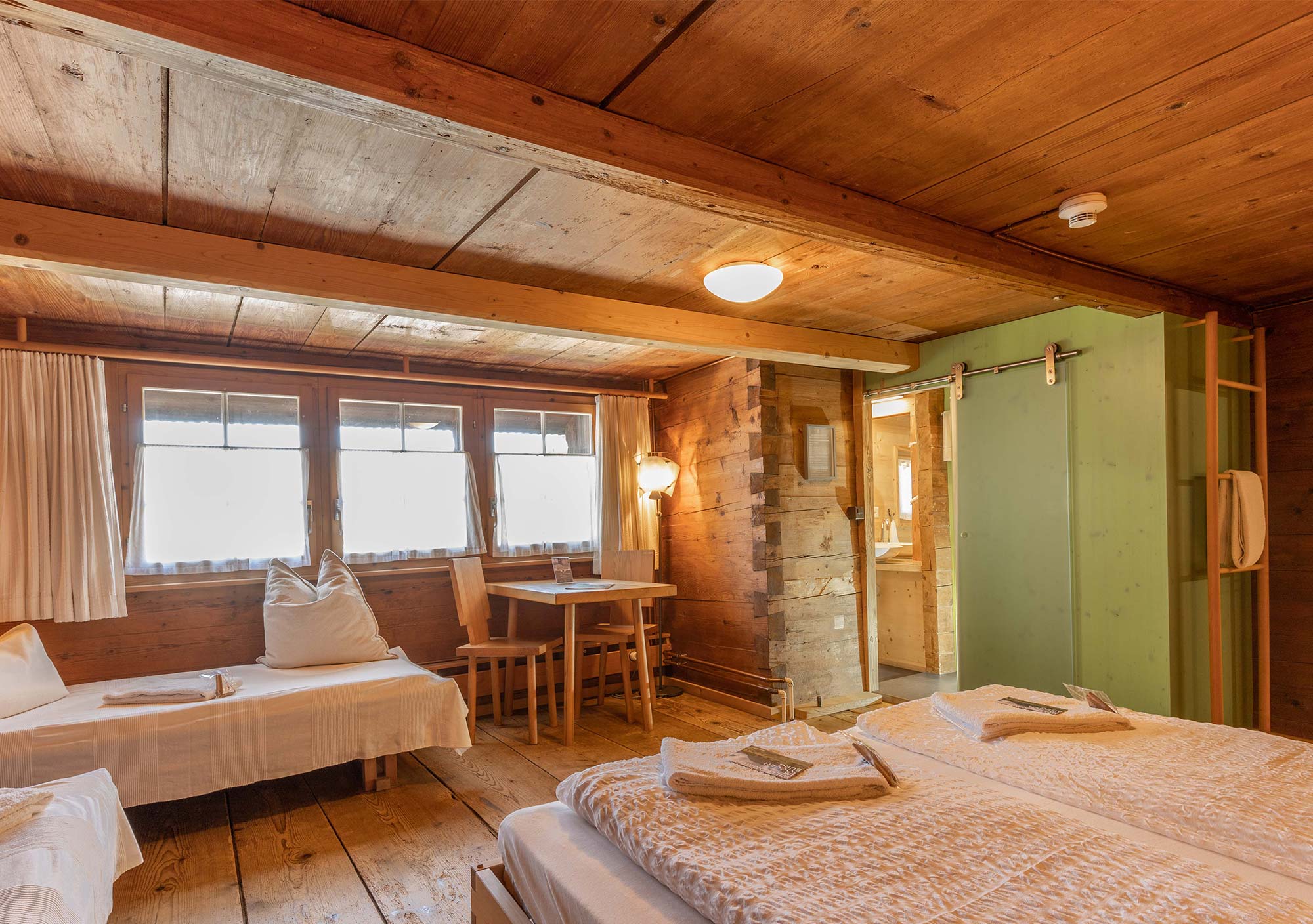 Special energy away from the hustle and bustle

Today Sabine enjoys the tranquility that the village of Mogelsberg exudes. She hears this again and again from her guests, who feel the "city stress" disappear after a short time after arriving. Time simply passes more slowly there - the best prerequisite for regenerating, spending a few nice days and being pampered.

Organic and sustainable right from the start

In addition to peace and quiet, Sabine wants to give guests an unforgettable stay. For them, this includes organic, seasonal and regional dishes in the restaurant and also an organic building, which ensures a special feel-good experience. The carpenters who do work in the hotel from time to time also have to comply with the building biology principle.

The hotel rooms are furnished with high-quality Swiss natural beds and curtains made of organic cotton or organic silk hang on the windows. Even with the supposedly small things of the hotel business, Sabine attaches great importance to environmental compatibility: Little is printed, paper is reused, cleaning is done with ecological cleaning agents, the rooms are equipped with LED lamps and the heating is connected to a central wood chip heating system in the village . 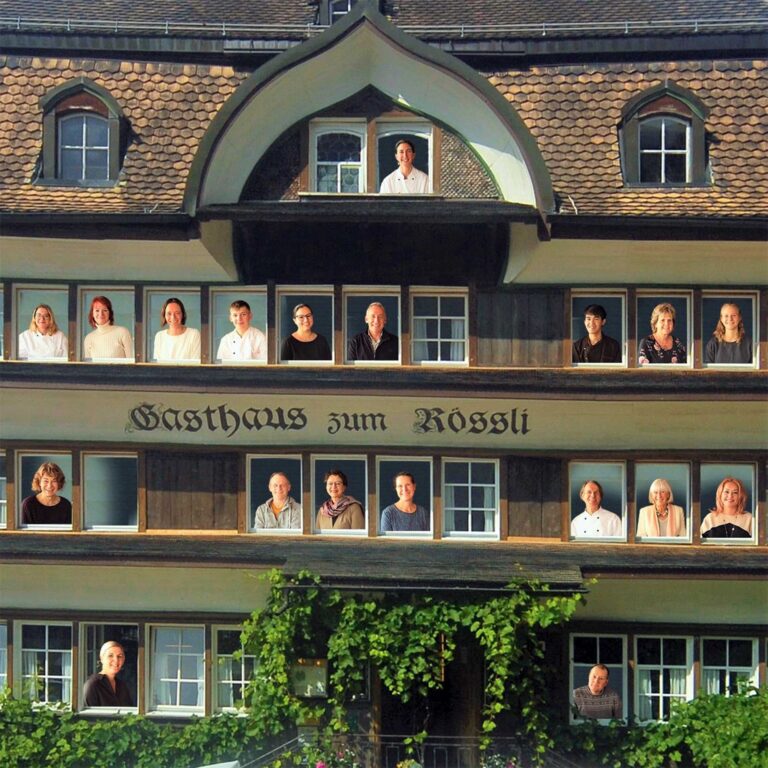 Even if it wasn't love at first sight with Sabine and the Rössli, it is a love that has lasted and grown for more than four decades. And that's exactly what the guests feel.

THE RÖSSLI MOGELSBERG GIVE US A RECIPE AND BAKE SCHLORZIFLADEN 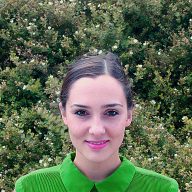 Cécile is a freelance author and sustainability strategist. She enjoys traveling to the fullest: getting to know different cultures, listening to other languages ​​and discovering new things either by the sea or in a (big) city always fascinates her. The stories and intentions of the Good Travel hosts are particularly important to her.

Magazines made for you.

Five places you can travel by night train

5 places for your next retreat