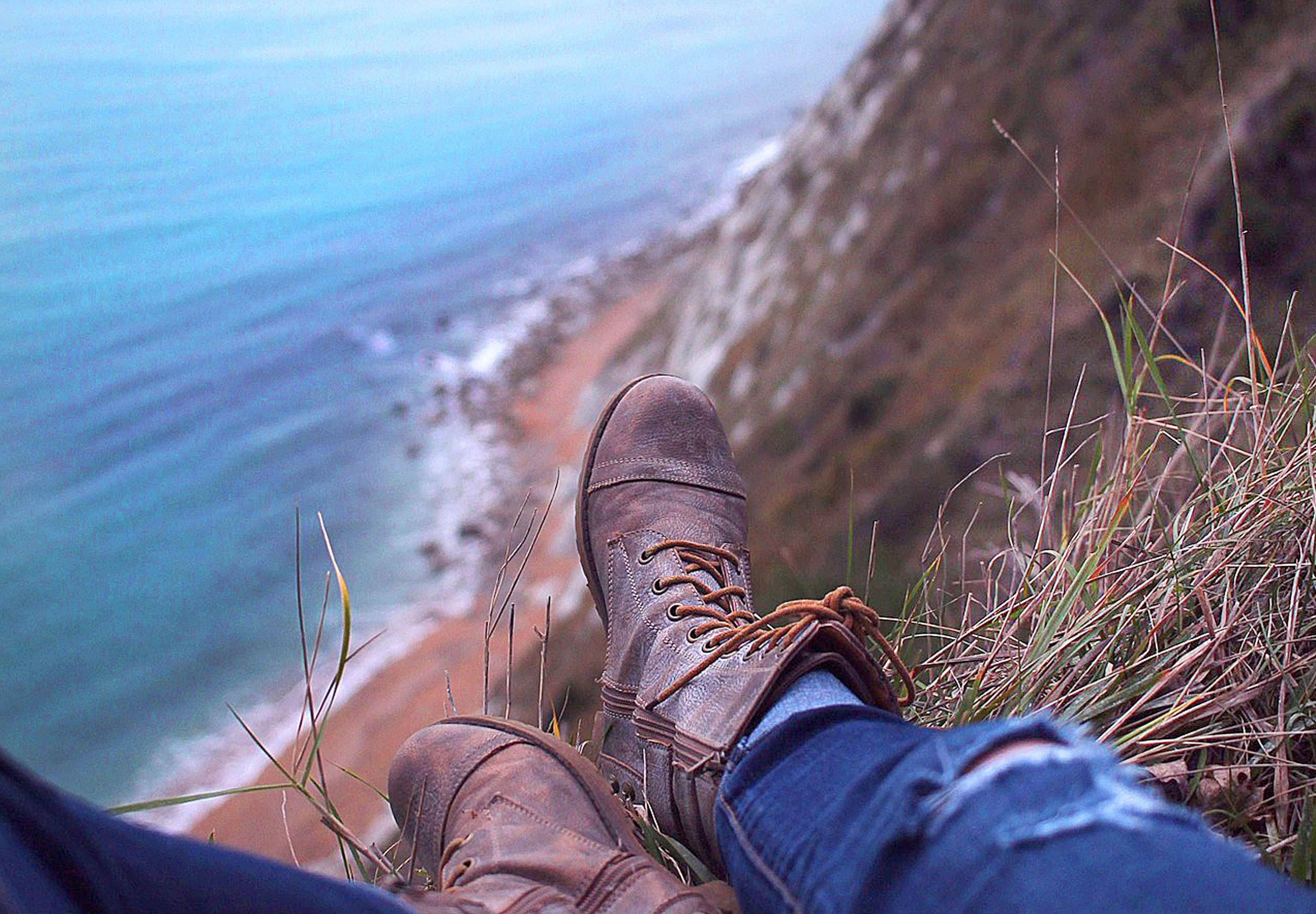 A guest contribution by Anja Dilk

It is a sunny November day when Kirsten Niemann starts the big ascent with brother, friend and cousin. The thermometer shows 22 degrees. As every morning, Kirsten skips breakfast. Grab your small rucksack, pack your sandwiches and water, put on your jacket, put your sneakers on and off you go. To Pico del Teide, the highest mountain on Tenerife, 3.718 meters high.

Months ago, Kirsten's brother Tom had applied online for permission to climb the summit. It sets a timeslot in which hikers can scramble up the last 150 meters of the Teide. If you don't make it in time, you have to turn around at the checkpoint and take the gondola back to the valley. The start is the parking lot at 2.200 meters. It starts at 10 a.m., with four hours left to the top.

It is a dream path into the sky blue. A wide path through a lunar landscape, reddish lava rock, moss. After two kilometers it tapers to a steep, stony path that winds up the mountain in serpentines. After every hairpin, there is a new, grandiose view of the island. But the altitude makes you breathless, the lack of breakfast is noticeable, the supplies have been eaten, the temperatures are dropping below zero, slight nausea sits in the stomach.

“Drink, you have to drink more,” shouts Tom. He's been up twice already, knows what matters. "I thought I would do it on one leg," says Kirsten. "But it was damn exhausting." But back with the gondola shortly before the summit? Locked out. The troops mobilize forces. At 14 p.m. the quartet is high up on the mountain. In front of you a view to the horizon, below you the island in 360-degree view and all around nothing but blue, blue sea. Kirsten: "It was one of the most beautiful experiences I have ever had on Tenerife."

Tenerife, the island of eternal spring, is the largest island in the Canaries off the west coast of Africa. Its mild climate, the varied landscape between rugged coastlines, black lava fields and high mountain ranges make it a place of longing for travelers from Europe. Especially in the autumn and winter months, when large parts of the old continent are covered by cloud cover, they are looking for light, warmth and palm flair.

People like Kirsten and her family. They have been gathering for family reunions in Tenerife for six years. "The landscape is beautiful, there is a lot to see," says Kirsten. There is the white beach Las Teresitas with sand from the Sahara and the black Playa Jardin in front of the capital Puerto de la Cruz, which glitters like ground granite. There are the misty pine forests in the Anaga Mountains in the northeast and the mighty gorges in the Teno Mountains in the northwest. There are the barren desert regions of the south and the picturesque villages and towns full of bars with spicy tapas and good wine. Tenerife is an ideal place to relax. 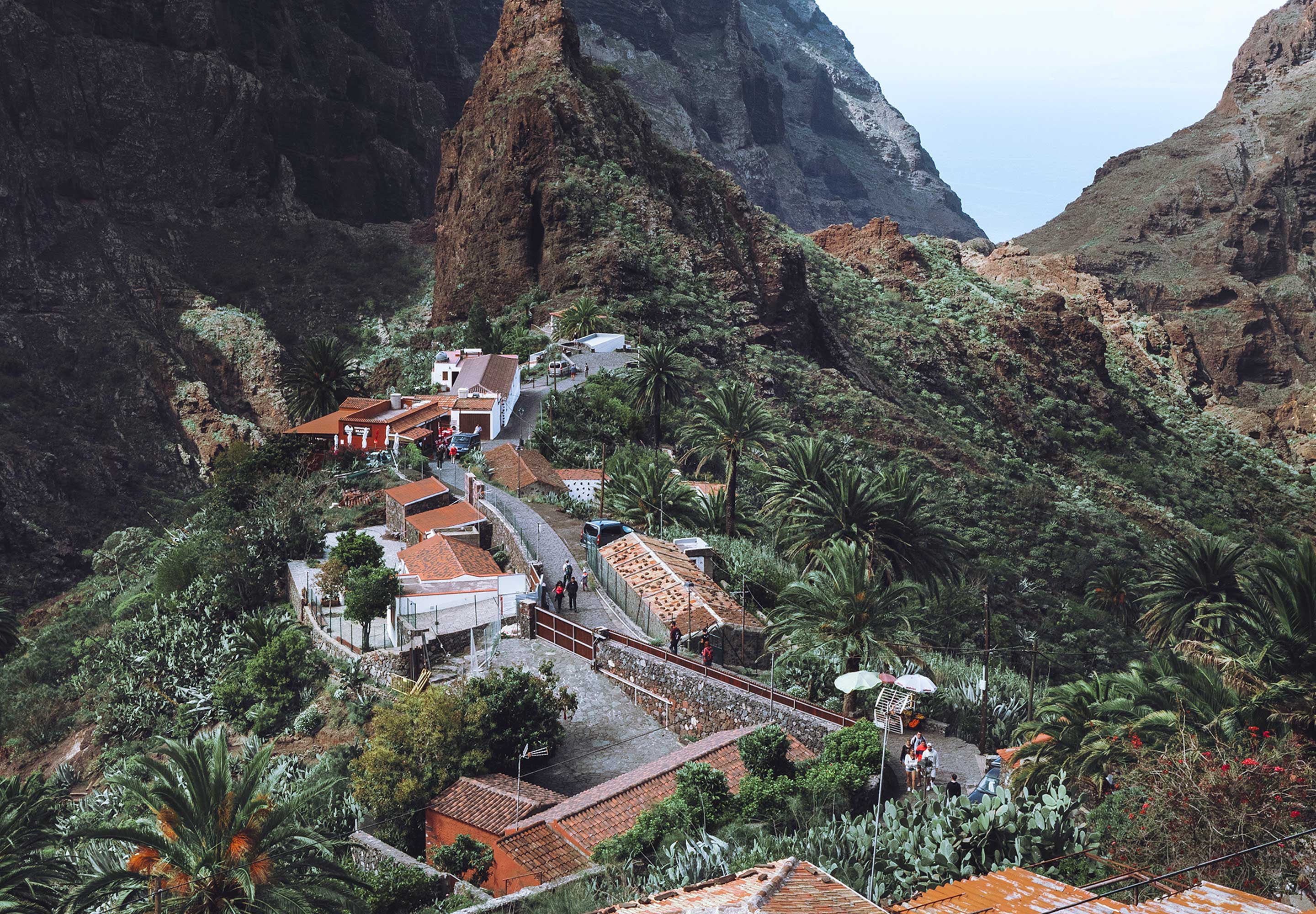 And above all: for hiking. A network of well-signposted hiking trails covers the volcanic island. From the city of Adeje, for example, an old goatherd's path leads through a nature reserve to the Brarranco del Infierno, the Hell Gorge, and a 560 meter high waterfall. Only 300 people have access here per day, for the sake of the environment (8 a.m. to 14 p.m., reservation required) The tour takes about three hours, and those who want to be on the road longer can continue to Roque del Conde, a huge rock in the middle of the landscape. Prickly pear cacti, King Juba milkweed and Strelizia line the path, the landscape is barren and spacious. There are similar bizarre rock formations in the National Park del Teide, the Roques de Garcia. A small circular hiking trail (30 kilometers) leads around the imposing rock massif. The path is particularly attractive at sunset, when the light makes the rocks shimmer red.

One of the most spectacular tours on the island is the path through the Masca gorge down to the sea. Ina-Maria Kater had her firmly on the plan when she went to Tenerife for two weeks with her husband over New Year's Eve 2018. "But the gorge was closed, there had been accidents," says Ina-Maria. Therefore, the duo first made their way to other corners of the island: walked around the small volcano El Taque, where light green pines stand out against the black ground as if painted. Wandered through the lunar landscape of the Praisje Lunar with its round rock formations - and finally tried Masca.

On the Komoot touring platform, Ina-Maria found a small route to the right of the gorge. The highlight: the almost seven-kilometer route leads along the mountain ridge. View of the sea, giant cacti, black lava rock. Ina-Maria: "The tour was the discovery of our vacation - absolutely fantastic."

The smallest island of the Canaries is located in the far west of the archipelago. It is more lonely and rougher than the others, just 6000 people live here. The landmark of El Hierro is the Arbol Santo Garoé, a huge laurel tree overgrown with moss, the tips of which are supported on the ground.

The Atlantic coast is spectacular, often rock arches connect rugged headlands in the sea. The hike to the largest rock arch in the west leads along the steep coast. Start is in Sabinosa, over the Punts la Dahesa to the El Verodal Picnic Site. 17,7 kilometers, 5,5 hours.

Highlight for a shorter hike: the circular route through the Mirador de Fileba cloud forest to El Golfo in the center of the island. 7,2 kilometers, 2 hours.

The rugged mountain landscape of the island is criss-crossed by hiking trails. The largest contiguous laurel forest in Europe is located in the Garajonay National Park. Ferns and moss-covered trees grow, streams gurgling, mist rises. Plant species that have long since disappeared elsewhere grow on the island, which has a population of 25. 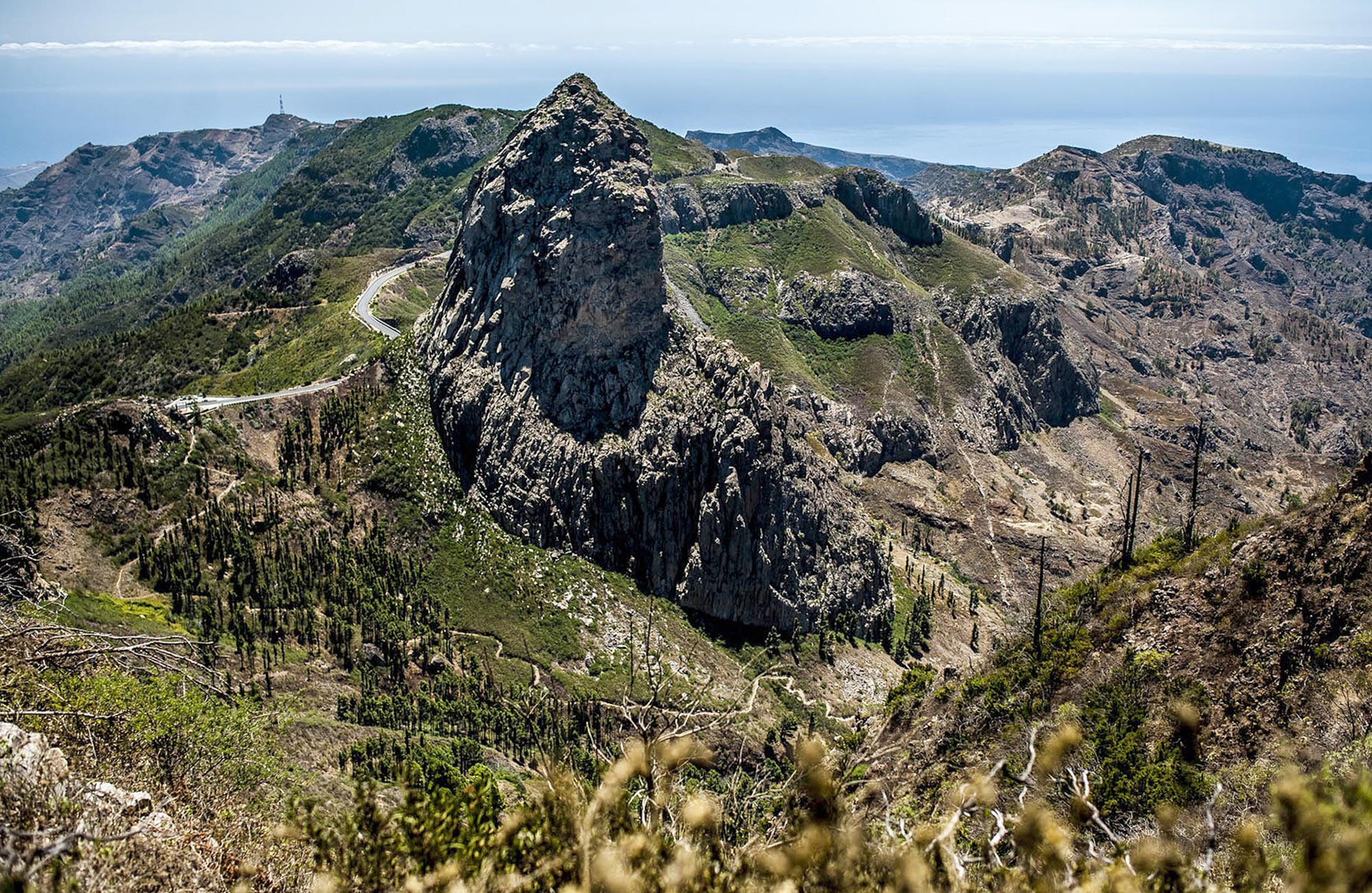 Towards the coast, a path leads through the Valle Gran Rey gorge past the slopes of the white village of La Calera down to the black sand beaches. There are tours of 1,5 to 6 hours in the national park. That's how long it takes to climb the 1487-meter-high Garajonay mountain. For those with good fitness: the GR-132 long-distance hiking trail leads around the island in nine days. Start is the capital San Sebastian. The paths are marked in red and white, it goes through gorges, valleys, mountain villages past vineyards, palm trees and cacti. Length: 140 kilometers.

Black plains, white houses, blue sky - the volcanic island of Lanzarote is a place of contrasts. It is located in the northeast of the Canary Islands, is rugged, spacious, crossed by volcanic craters and geysers. Ideal for hikers: the Timanfaya National Park with its lava landscape. The Cueva de los Verdes cave is famous and concerts are held in it.

A coastal hike from Dalina de Janubio to Punta Gorda is worthwhile. 17 kilometers it goes directly along the sea, over sharp rocks, beaches and paths. Those who prefer to go on a tour in the mountains should climb the Penas del Chache. It is 670 meters high and hikers have a wonderful view of the island.

There are particularly beautiful, sustainable accommodations to discover on the volcanic island of Lanzarote. Click here you can find handpicked places for sustainable travel. 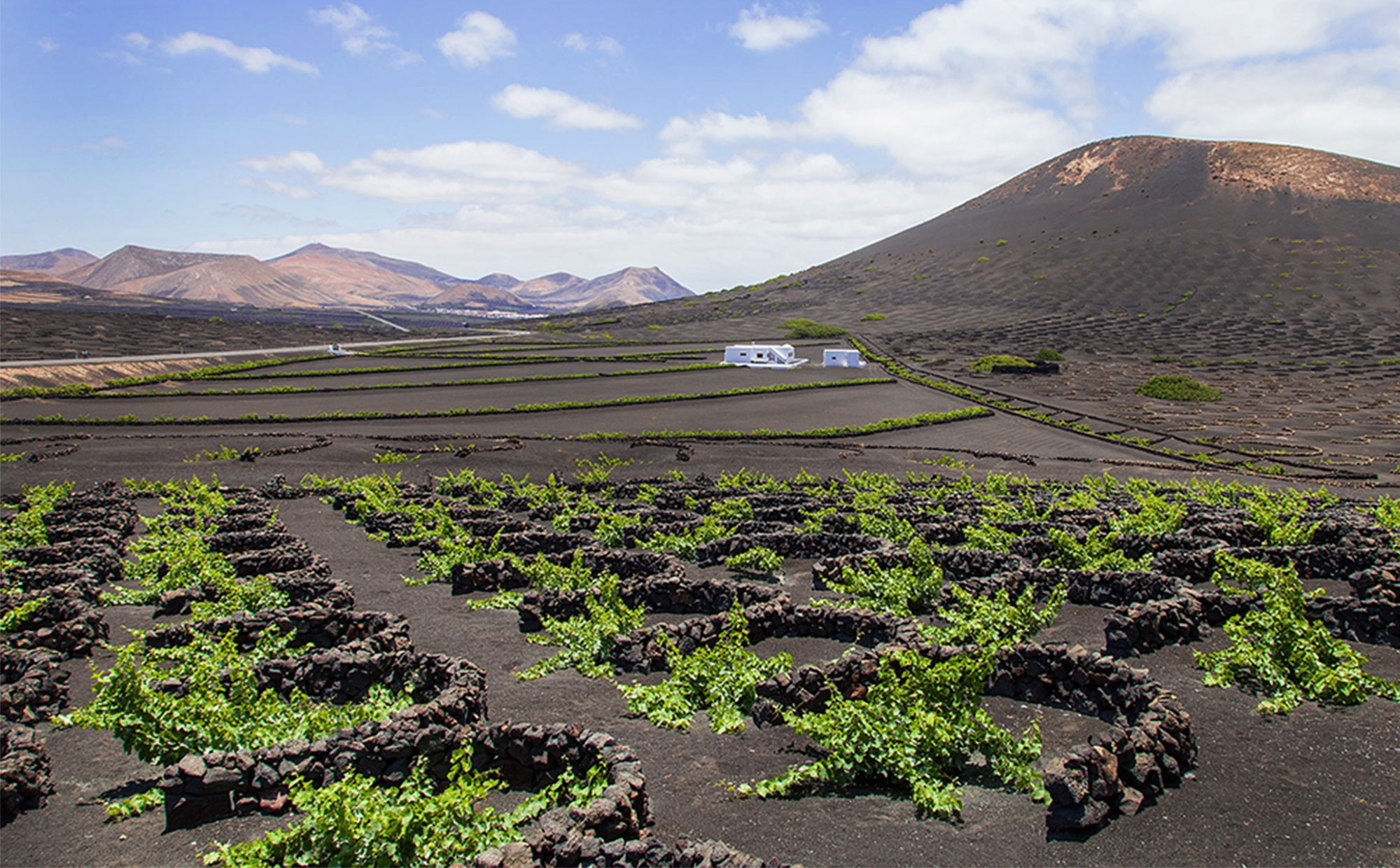